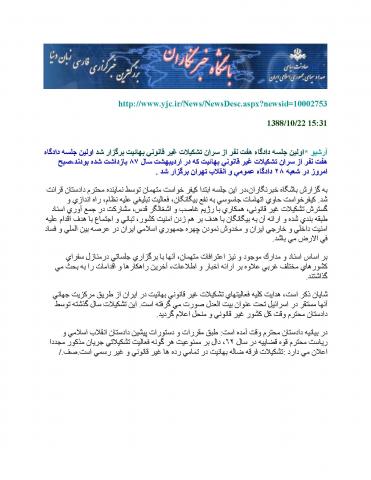 The first hearing of the seven leaders of the illegal Baha’i [group], who were arrested in May 2009, was held this morning at Branch 28 of the General and Revolutionary Courts of Tehran.

According to the report from the Journalist Club, at the hearing, the indictment was first read by the respected prosecutor’s representative.

At the hearing, the representative of the respective prosecutors first read the indictment of the accused, according to the report.

The indictment includes [charges of] espionage in favour of foreigners, propaganda against the regime, establishment and expansion of an illegal organization, cooperation with the usurping and occupying regime of Quds [Israel], participation in the collection of classified documents and its presentation to aliens, aimed at acting against Iran’s internal and external security, distorting the image of the Islamic Republic of Iran in the international arena, and corruption on earth.

Based on the available evidence as well as the confessions of the defendants, in addition to sharing the news and information, [it is apparent that] they had arranged meetings at the homes of the ambassadors of Western countries to discuss the latest solutions and actions.

It is worth noting that all activities of the Baha’i organizations in Iran have been conducted through their Israeli-based international organization named the House of Justice. This organization was declared illegal and dissolved last year by the then public prosecutor of the country.

The statement by the public prosecutor general says: “Based on the [information from the] previous public prosecutor general of the Islamic Revolution and the honorable head of the judiciary in 1362, regarding the prohibition of any organizational activities, it is again announced that the organizations of the perverse Baha’i sect are illegal and unofficial in all ranks.  SF/