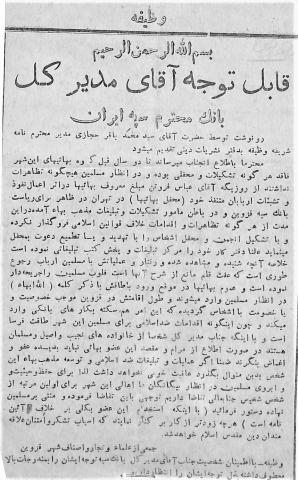 Respectfully, it is hereby conveyed that until two years ago the Baha’i groups in this city had no administration or assemblies and were not visible to the eyes of the Muslims in any way. Since the arrival of Mr. Abbas Foroutan, the famous Baha’i preacher, as a result of the instigation of his influential bosses (the Baha’i Assembly) in Tehran—ostensibly as the head of the Sepah Bank in Qazvin, but in reality as an agent of administration and propagation of the religion of Baha—he has done nothing but engage in propaganda and activate prompts against the Islamic laws.

By organizing gatherings and assemblies, he invites people to join the assembly by threatening or bribing them, and has openly turned his office into a centre for propaganda and distribution of propagandist books. In brief, based on what is being heard and seen, his behaviour toward the Muslim customers is such that the decency of our pen is unable to recount. He has hurt the hearts of the Muslim people, and all Baha’is enter his room by saying the word (Allah’u’Abha) in front of the Muslims. His stay in Qazvin has led to special treatment of some or enmity with others, which is, in and of itself, damaging to the banking operations.

Given that such anti-Islamic activities are intolerable for the Muslim people of this city, and that you yourself are from a chaste and reputable Muslim family, once you are informed of this, you should not forgive and overlook the behaviour and intentions of this Baha’i person. Furthermore, if these anti-Islamic activities and propaganda and the expansion of the religion of Baha continue in this way, things will not end well. Therefore, to preserve the reputation and honour of Muslims, we, the residents of this city, respectfully request for the first time your attention to this plea and that you bestow a favour upon Muslims and issue an order (notwithstanding that the employment of this member is, in any case, completely against the law) for him to be immediately removed from his position, which would make the followers of the sacred religion of Islam most appreciative and grateful.

A group of religious scholars, merchants, and tradesmen in Qazvin

Vazifeh – With our trust in the character of the chief executive officer of the Sepah Bank, we draw his attention to the above statement and expect his full consideration.