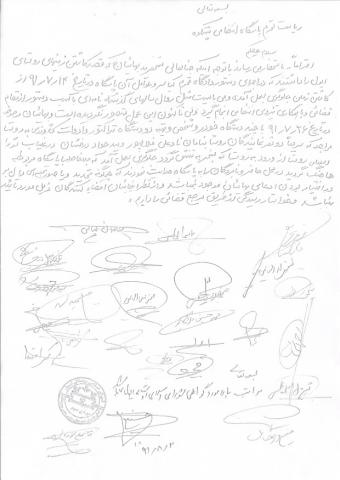 The Esteemed Commander of the Police Station of Poshtkuh

We wish to respectfully inform you that, as Your Honour has been informed, the Baha’is that intended to plant their lands in the Village of Ivel in the execution of the order of the esteemed Court of Kiasar and the agents of that checkpoint on 14 Mehr 1391 [5 October 2012], were prevented from planting. They should, as in previous years, seek an order from the judicial authority in collaboration with the police. But so far, this action has not been done.

The Baha’is that were described went to the village on 26 Mehr 1391 [17 October 2012], with several private vehicles, two tractors and the agricultural equipment. In the absence of the Islamic Council, two village representatives, by the names of Nad-Ali Fallahpour and Seyyed Javad Derakhshan, immediately prevented them from entering the village, so that it might not lead to tensions.

It was immediately coordinated with the relevant checkpoint; [officers] were present at the location and Baha’is were directed to the checkpoint. There was not any official report concerning the claims of the Baha’is.

We confirm the signatures below and request an investigation to be carried out by the judicial authorities.

[Signatures of a few people]

[Handwritten note at the bottom of the page:]

Islamic Council of the Village of Ivel