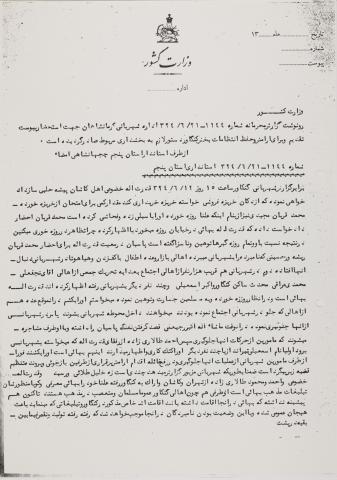 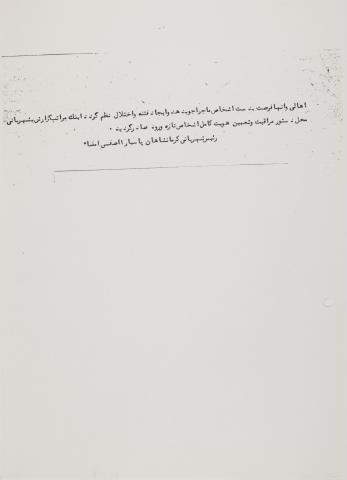 Ministry of the Interior,

A copy of confidential report number 1144 – 21 Shahrivar 1324 [12 September 1945] from the police station of Kermanshahan is enclosed for your information, and the necessary orders have been issued to the District for maintaining the peace and order of the Kangavar District.

On behalf of the Governor General of the Fifth Province, Jahanshahi [signature]

According to the report of the police of Kangavar, at 15:00 [hours] on 12 Shahirivar 1324 [3 September 1945], [Mr.] Ghodratollah Khozouie, a tinsmith from Kashan, alleged that when he was trying to purchase melons at a shop, and in order to taste one, he cut a small piece. But Mohammad Ghorban Majidi Bazzaz slapped and swore at him, accusing him of eating in public during the Fast.  Mohammad Ghorban was summoned; he complained that the Baha’i Ghodratollah was eating food in public during the Fast and that he had said to him, “Why are you breaking the Fast openly?”  [In this way,] he insulted him and disrespected all other non-Muslims.

At that moment, many of the locals who had gathered outside the police station wanted to go inside, but the police officer prevented them. At once, Mashallah Akbar [and] Rajab Ali tried to grab the officer’s gun. While arguing, the police officers prevented them. Then Ahmad Talarizadeh, one of the friends of Ghodratollah, who was trying to go to the police station, [along with] someone by the name of Olya Esmaili Teerandaz and a few others, beat him up and [said that since he was a] Baha’i too, [they should] kill him.  The police officers immediately stopped them and proceeded to calm the situation down and restored peace. Both parties were interrogated; cases were opened and are being prosecuted.

Also, according to the report of the aforementioned police station, it is some time since Khalil Talai, [Javad] Rashidi, Ghodratollah Khozouie, and Ahmad Talarizadeh from Tehran, Kashan and Arak, went to Kangavar and publically announced themselves to be Baha’is; apparently, their intention is to promote the Baha’i religion.

At the same time, because the residents of Kangavar are mostly Muslims and religiously fanatic, and, so far, no Baha’i has ever resided in that place, the residence of the mentioned individuals in Kangavar and their propaganda has caused public uproar. Considering the current situation, their residence here will gradually cause hostility amongst and will provide opportunity for adventurists to create sedition and cause disorder.

Now the incident has been reported and an order has been issued to the police station to be vigilant and disclose the identity of all newcomers.

The Chief of Police of Kermanshahan,

Telegram of Morteza Khani to Mayor of Bandar-Shah