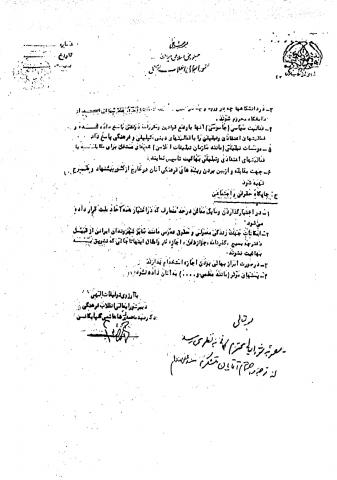 Head of the Office of the Esteemed Leader [Khamenei]

After greetings, with reference to the letter number 1-783S dated 10 Dey 1369 [31 December 1990], concerning the instructions of the Esteemed Leader which had been conveyed to the Respected President regarding the Baha’i question, we inform you that, since the respected President and the Head of the Supreme Revolutionary Cultural Council had referred this question to this Council for consideration and study, it was placed on the Council’s agenda of session number 128 on 16 Bahman 1369 [5 February 1991] and session number 119 of 2 Bahman 1369 [22 January 1991]. In addition to the above, and further to the [results of the] discussions held in this regard in session number 112 of 2 Mordad 1366 [24 July 1987] presided over by the Esteemed Leader (head and member of the Supreme Council), the recent views and directives given by the Esteemed Leader regarding the Baha’i question were conveyed to the Supreme Council. In consideration of the contents of the Constitution of the Islamic Republic of Iran, as well as the religious and civil laws and general policies of the country, these matters were carefully studied and decisions pronounced.

In arriving at the decisions and proposing reasonable ways to counter the above question, due consideration was given to the wishes of the Esteemed Leadership of the Islamic Republic of Iran [Khamenei], namely, that “in this regard a specific policy should be devised in such a way that everyone will understand what should or should not be done.” Consequently, the following proposals and recommendations resulted from these discussions.

The respected President of the Islamic Republic of Iran, as well as the Head of the Supreme Revolutionary Cultural Council, while approving these recommendations, instructed us to convey them to the Esteemed Leader [Khamenei] so that appropriate action may be taken according to his guidance.

Summary of the results of the discussions and recommendation

A. General status of the Baha’is within the country’s system

B. Educational and cultural status

The decision of the Supreme Revolutionary Cultural Council seems sufficient.

I thank you gentlemen for your attention and efforts.