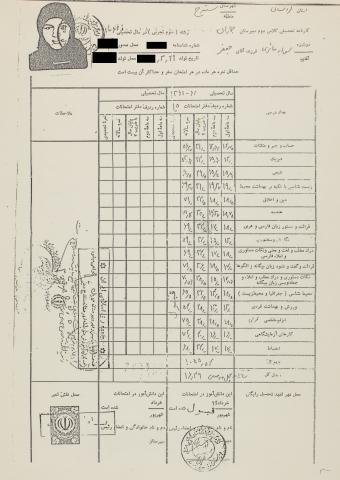 Minimum mark is Zero and maximum is 20.

[Official stamp of the school]

[Subjects and results for each term are recorded]

[This form is a transcript of academic documents pertaining to Soudabeh Haeri, in Experimental Science, Level Two of Jamaran Senior High School. She has passed with an average of 16.49/20. In the left hand corner of the page there is a hand written note from the Head of the Department of Education of Sanandaj city, with signature and three stamps.  The note states:]

It is necessary to explain that the above-mentioned individual has been expelled from school due to her engaging in propaganda in favour of Baha’ism.

Iran Wire: When my school principal tore up my file

Iranwire: Mehrangiz Kar: Baha’i children are alone with their fears

School children should be able to start the academic year, without fear of being questioned about their beliefs

Radio Farda: Minister of Education: The followers of unrecognised religions are banned from universities

Minister of Education: Those who say they belong to unofficial religions cannot enter university

Difficulties of a Baha’i student enrolling at school

Persecution of Baha’i students in schools

Persecution of Baha’i students at schools

Expulsion of Elham Kian from school

Refusal to enrol Baha'i student at school in Tonekabon

Baha'i primary student, Arezou, not allowed to enrol at primary school in Tehran

A "very well behaved student" is expelled for being a Baha'i

Mahnaz Zakerian Joshaghani expelled from university for being a Baha’i

School certifies Rozita Bayat's attendance, and states that she is a Baha'i

Explanation requested for expulsion of Omid Taghizadeh from school

School certifies that Noushin Hoseini has been a student at third grade, and states that she is a Baha'i

School certifies Shima Baghaie's attendance, and states that she is a Baha'i

Vida Zebardast has passed her exams, and has stated she is a Baha'i

Farzaneh Pashaie, student of 4th grade, has satisfactory conduct, but she is a Baha'i

Confirmation that Rozita Nouri-Diznab was expelled from school, and school authorities were fully satisfied with her conduct

Nima Rajabzadeh has passed his exams, and has stated he is a Baha'i

Lider Tebyanian not allowed to participate in final examinations

Saadi Secondary School confirms that Ramin Jannati had studied there, and that he is a Baha'i

Certification that Mehrzad Forouzan attended 10th grade of high school, pointing out that he is a Baha'i

Certification that Mohammad Esmail Forouzan attended 10th grade of high school, pointing out that he is a Baha'i

Sakineh Johari is expelled from high school due to her beliefs

Iranian schools in UAE not allowed to enrol Farhad Farangpour

Saadi Secondary School confirms that Siamak Ahrarai has studied there, and that he is a Baha'i

Report of school on a Baha’i student

Expulsion of Soheila Vahdati from school

Akram and Afagh Motahhari expelled from school in Yazd

Letter from Mohammad Rafiei to Isfahan governor about students

Expulsion of Baha’i students from schools

Department of Education of Isfahan: Farshid Bahamin has a “belief” issue

Mohammad Hosein Ahrari protests about denial of education to his son