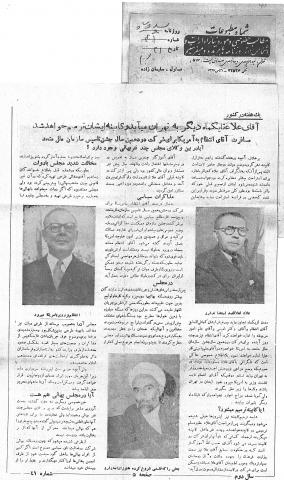 A Week In the Country

Mr. Ala Will Come to Tehran within the Next Month and His Cabinet Will Be Restored

The Trip of Mr. Entezam to the United States to Participate In the Tenth Anniversary of the Establishment of the United Nations

How Many Baha’i Are Amongst the Parliamentary Representatives?

Further to speeches of Mr. Falsafi and subsequent events, the representatives have largely focused on the issue of Baha’is and the majority of the work [of the Parliament] and the bills were left dormant for this reason, to the extent that some observers are of the opinion that these days when the issue of fighting land-grabbers is on the agenda, different organs are working more than ever on passing the related bills. The opponents and those who saw their interest being threatened started their manoeuvres and brought up the issue of Baha’ism in the Parliament so that, in this way, actions for reforms or purges would be delayed.

As we informed our readers in the last issue, Mr. Safaie had devised a plan in which he had projected an illegal status for the Baha’is. However, the Parliament believed that, if the government wants to fight against the Baha’is, the government must devise and bring a plan to the Parliament so that it can be approved. On the other hand, the government was opposed to devising such a plan and there was a severe struggle behind the scenes about this issue. Finally, after lengthy discussions and consultations, the issue was taken care of through the issuing of memoranda to governors and mayors by the Ministry of the Interior about preventing activities of anti-Islamic sects.

Certainly, this is a long story because this issue will be criticized by a number of clergy and it is likely that it could continue into the months of Muharram and Safar.

Are There Baha’is in the Parliament Too?

We obtained a confidential piece of news last week, indicating that there are a few Baha’i individuals among the parliamentary representatives.  However, our efforts to definitively identify them did not produce any results. It is said that there is no evidence at hand to prove the connection to Baha’ism for the five individuals who are thought to be Baha’is.

On the other hand, we hear that, because in the Baha’i sect interference in political activities is forbidden, if a Baha’i individual enters the arena of politics, the Baha’i community will remove them and will only consider them as their friend.