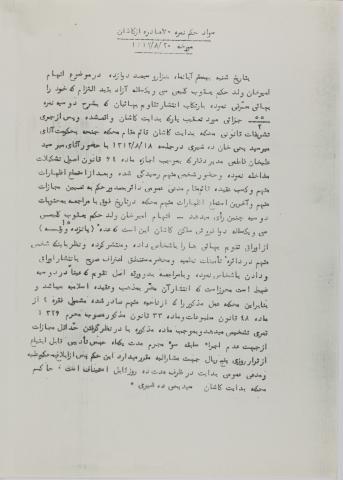 On Saturday, 20 Aban 1312 [11 November 1933], the allegations against Amir Khan, son of Hakim Yaghoub Kalimi, 31 years old, who had been released on bail, and who had introduced himself as a Baha’i and was arrested and prosecuted for distribution of the Baha’i calendars, as explained in file number 55-2, were presented to the Provisional Court of Kashan.  After conducting the legal procedures, the Provisional Court of Kashan, acting as Deputy of the Criminal Court, presided over by Mr. Mir-Seyyed Yahya Khan Dehshiri on 18 Aban 1312 [9 November 1933] and in the presence of the office secretary, Mr. Mir Seyyed Ali Khan Fatemi, intervened on the basis of Article 64 of the Public Administration Regulations, and in the presence of the defendant, subsequent to hearing the last explanations of the accused and having investigated the records, the Court at the above-mentioned date, rendered its decision as follows:

Amir Khan, who is a chemist, 31 years old, and the son of Yaghoub Kalimi, is charged with the distribution of fifteen pages of the Baha’i calendar to [various] individuals. During the investigation at the police station, and in the presence of the investigator, he confessed to [the charges]. Having referred to two copies of [the calendars], which were kept in the file, the court considers them harmful and against the Islamic religion and beliefs, falling under Article 4 of section 48 of the Law of Libel, and Article 33 of the same law, which was approved in Muharram 1326 [February/March 1908]. Based on these Articles, and considering the accused’s lack of previous criminal records, the court imposes the [minimum] punishment of a fine of five rials per day in lieu of one month of correctional imprisonment.

This ruling will be appealable within ten days following its announcement.

The judge of Provincial Court of Kashan – Seyyed Yahya Dehshiri