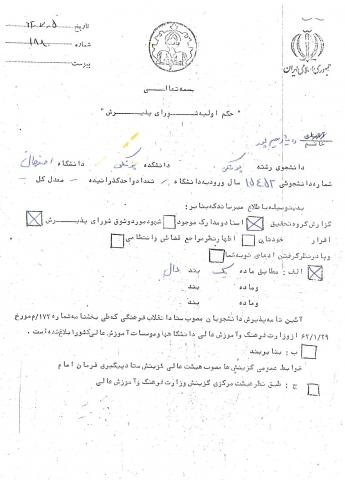 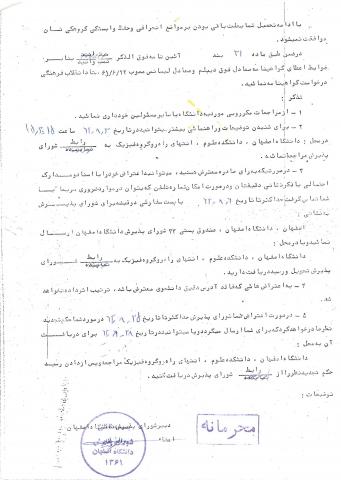 The primary decision of the Admission Council

“The primary decision of the Admission Council”

Student identification number: 15453; Year of admission to the University: -----;

[You are] advised herewith that, according to:

The report of the Research Team ⊠, Available documents and records ⎕, Reliable witnesses by the Recognition Council⊠, Your own confession ⎕, Opinion of the Judicial and law enforcement authorities ⊠, And claiming your act of recantation ⎕:

⊠According to section one of paragraph D

of the Students Admission Regulations, approved by the Cultural Revolution Headquarters, which were announced in notice number M/172, dated 29 Farvardin 1362 [18 April 1983], from the Ministry of Culture and Higher Education to the Universities and Institutions of Higher Education of the Country,

Selection of the general rules approved by the Supreme Selection Council of the Office of Following-up the Imam Orders.

Continuation of your education has been declined due to your persistence in the deviant [belief] and keeping your connection to your group.

In addition, according to the Article 31 of Clause ----- of the aforementioned Regulation, you cannot apply for a certificate according to the procedure of granting an equivalent certificate of Post-Diploma [Associate] degree and equivalent to a Bachelor’s degree, approved on 22 Shahrivar 1361 [13 September 1982] of the Cultural Revolution Headquarters.

Clerk of the Admission Council of the University of Isfahan

[Signature and stamp of the Council of Acceptance of the University of Isfahan, 1361]