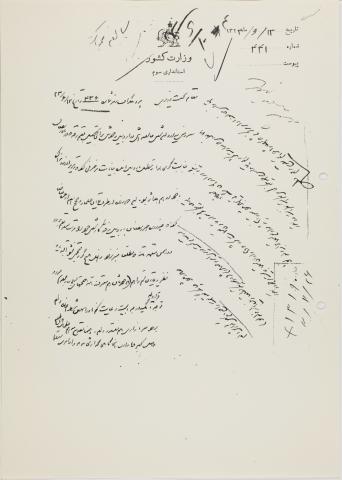 The Office of Governor General of Third [Province]

Further to the coded telegram 436, dated 12 Shahrivar 1323 [3 September 1944], it is hereby submitted that the family of this person[1] lives in Ardabil and he went to Qom to study. During Ramadan, due to the warm weather and vacation, he has come back to Ardabil. Because he was talking nonsense, he was brought to Tabriz. Conversing with him had no effect. In the past two days, it was requested on behalf of the high ranking Islamic clergy that within these remaining days of Ramadan, I should let him go to Ardabil to organize his personal affairs and then leave for Qom. At the same time, they promise that he will absolutely not go to the pulpit and will not engage in any kind of conversation. Of course, it is important for me to pay attention to the views of the clergy, (who themselves admit that he has talked out of boundaries). According to the promise, I let him go. Also I issued pertinent orders to the Governor.

I would also like to mention to you that, as I have found out, the Governors sometimes report and receive orders directly. He[2] stated that he has reported to and received orders from the Office of the Prime Minister, (while I have not been absolutely informed of that). I would [respectfully] request that despite the fact that according to the National Decision Making Procedures Act, the governors should contact [the Office of the Prime Minister] directly and receive orders—in Azerbaijan, specifically, [this procedure] causes problems—so please order that no direct reply is to be provided [to such inquiries].  The Ministry of the Interior also seeks the advice of the Office of Governor General, because sometime the opinions and orders of the Governor General might be different from the Central [Government’s] orders. I have taken your valuable time only because I wanted to bring this matter to your attention.