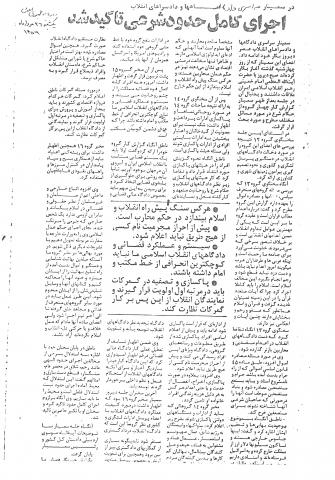 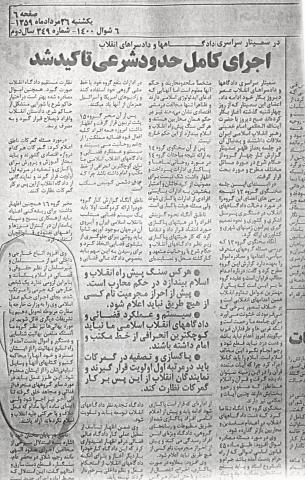 At the Cross-Country Seminar of the Revolutionary Courts and Prosecutors, the Enforcement of the Shari’a Law was Emphasized.

Yesterday afternoon, the Cross-Country Seminar of the Revolutionary Courts and Prosecutors continued. The members of this Seminar, which started last Wednesday, met with the leader of Iran’s Islamic Revolution, Grand Ayatollah Imam Khomeini; subsequent to that, during the afternoon session of that seminar, the reports of four groups of Islamic judges were presented and discussed.

At this point, the speaker of Group 13, who handles the investigation of politically perverse groups, executions and confiscation of their properties, presented the report of this group........

The speaker then referred to the issue of the existence of the Baha’is and their persecution and said, “These are spies of the foreigners and they have hitherto sent millions of dollars to foreign countries and Israel; also, we have documents that Baha’is in…”

He added that nationals [Iranian citizens] and non-citizens, whether Muslim or non-Muslim, are considered as equal in Islam. Therefore, it is not necessary that foreigners who have committed a crime, instead of receiving Islamic Justice, be sent to the Ministry of Foreign Affairs or to their respective embassy. About the Baha’is, it is the opinion of our group that those Baha’is who are propagating must be identified, arrested and their belongings that have been earned through propagation of Baha’ism be confiscated, and they must be tried and their teaching material and instruments destroyed. This practice must be implemented for all the perverse [deviant] groups of Fadaeis and Mujahidin Khalgh. But their ordinary members, as long as they have not committed any anti-Islamic and anti-revolutionary action, must remain at liberty…