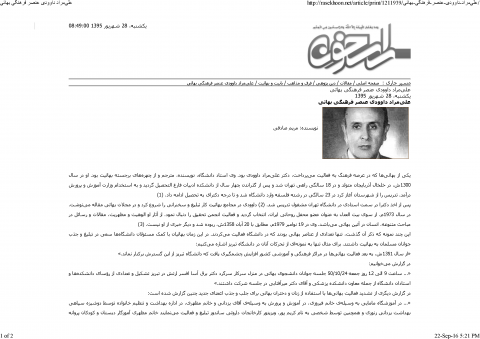 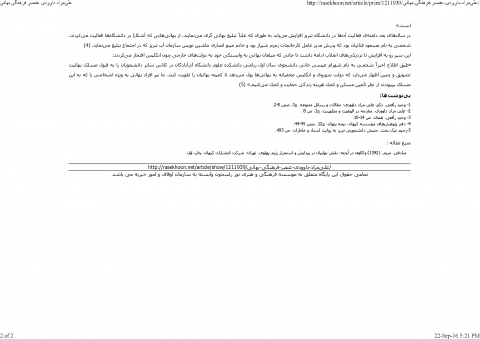 One of the Baha’is working in the field of culture was Dr. Alimorad Davoudi. He was a university professor, writer and translator, and was one of the prominent Baha’i figures. After receiving his doctorate, he became a professor at the University of Tehran. Davoudi began teaching and lecturing in the Baha’i gatherings, and writing articles for the Baha’i magazines.

At this time, the Baha’is, with the help of university officials, tried to teach and attract Muslim youth to Baha’ism. We will mention only one example of their activities at the University of Tabriz:

“From 1351 [1972] onwards, the activity of Baha’is in the cultural and educational centres of the country increased significantly, and the University of Tabriz was not excluded from this expansion.”

In the report we read:

“... [Between] 9:00 and 12:00 on Friday, 14 January, a meeting of young Baha’i college students was held at the home of Major Dr. Bargh-Asa, an army officer in Tabriz, and a number of deans and professors, including the vice chancellor of the Medical School, and Dr. Mir-Aftabi, were present at the meeting.

Another report on the intensification of Baha’i activities by using Baha’i women and girls to attract and recruit new members states:

In the following years, the scope of their activities at the University of Tabriz was increased, where they openly propagated Baha’ism. Among the Baha’is who were openly active in the universities was a man named Masoud Fanaian, whose father was the managing director of the Zamzam factories in Shiraz, and Mrs. Minou Ansari, a typist for the Tabriz Water Organization, who preached in the community.