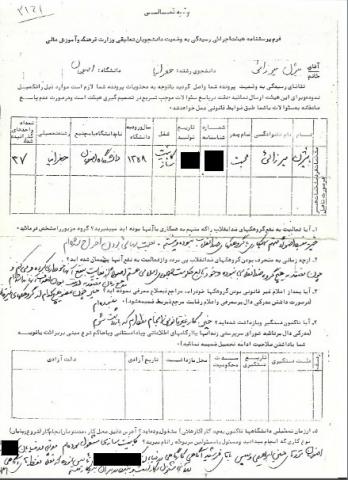 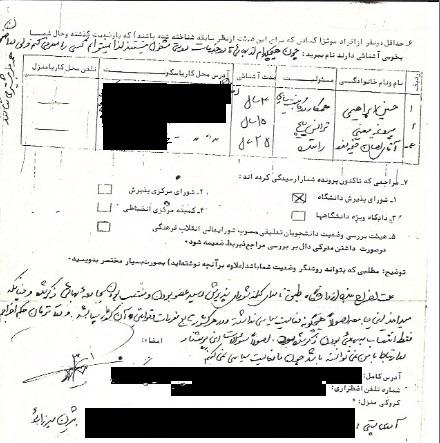 Questionnaire Form of the Executive Committee of the Ministry of Culture and Higher Education, investigating the suitability of suspended student [for readmission]

We have received your request to review your case. In view of the contents of your file, it is necessary that you complete the following items and send them to this committee. Your careful responses to the questions will accelerate the decision of the committee. In case of untruth in responses, you will be dealt with according to the law.

[Handwritten Reply] No - I have not been accused of collaboration with anti-revolutionary groups in any way; I was expelled because of my membership in the Baha’i Faith.

[Handwritten Reply] No, because I have never been a member of any illegal groups.

[Handwritten Reply] No; I have not done anything illegal to be detained for.

[Handwritten Reply] I was engaged in cabinet-making. For some time I was working for Mr. Hosein Ebrahimi on [illegible] street in Isfahan. Later, I worked with Mr. Farshid Agahi. There was a workshop in [redacted] and Doran Street. Currently, only Mr. Agahi is working there and I am unemployed.

[Handwritten Reply] Given that no Baha’is are currently serving in any government positions, I can’t introduce anyone. But most people know me in Isfahan.

The authorities that have so far reviewed your case:

Attach any supporting documents from the relevant authorities.

Note: Provide any information (in addition to what you have stated) that might clarify your case.  Please be concise:

[Handwritten Reply] The reason stated for my expulsion from the university, according to the letter received from the Admissions Council, was membership in, and being connected to, the Baha’i community. As you are aware, this community does not engage in any political activity and is obedient to the laws and regulations of the government of any country they live in. At the time, the only reason stated for my expulsion was being a Baha’i. Basically, the questions listed in this questionnaire cannot have any relevance to me, because we do not engage in political activity.

Iranwire: Khatami’s government and deceiving the international community about the rights of Baha’is

HRANA: Former Baha’i prisoner of war and disabled war veteran has problem getting his degree certificate

Iranwire: Mr Larijani, follow up on my case, please!

Iranwire: Conversation of a Baha’i student with three members of Iran’s parliament

HRANA: Letter from a Baha’i to Mohammad Javad Larijani

Questionnaire for families of deceased Baha’is

Questionnaire of Post Bank of Iran to identify Baha’i workers

Form for undertaking not to engage in any Baha'i activity

Baha'is not qualified to be recruited in government offices

Question about applicants' religion in application forms to renew, extend or reissue passport for Iranians abroad

Applicants asked to state their religion in Questionnaire for Student Transfer