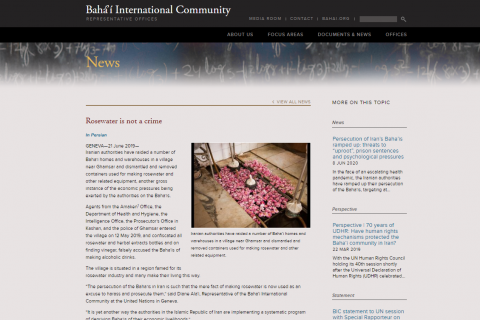 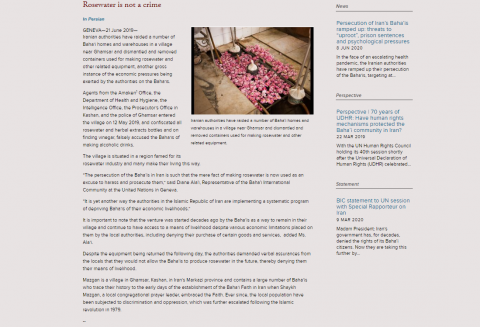 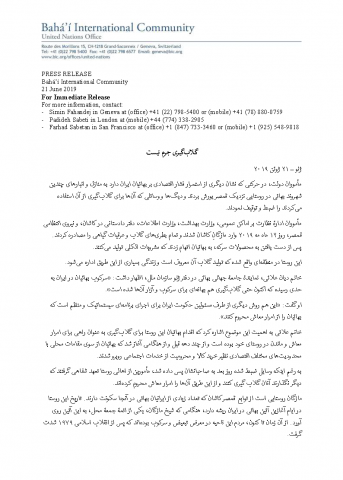 Rosewater is not a crime

Iranian authorities have raided a number of Baha’i homes and warehouses in a village near Ghamsar and dismantled and removed containers used for making rosewater and other related equipment, another gross instance of the economic pressures being exerted by the authorities on the Baha’is.

Agents from the Amaken[i] Office, the Department of Health and Hygiene, the Intelligence Office, the Prosecutor’s Office in Kashan, and the police of Ghamsar entered the village on 12 May 2019, and confiscated all rosewater and herbal extracts bottles and on finding vinegar, falsely accused the Baha’is of making alcoholic drinks.

The village is situated in a region famed for its rosewater industry and many make their living this way.

“The persecution of the Baha’is in Iran is such that the mere fact of making rosewater is now used as an excuse to harass and prosecute them,” said Diane Ala'i, Representative of the Baha'i International Community at the United Nations in Geneva.

“It is yet another way the authorities in the Islamic Republic of Iran are implementing a systematic program of depriving Baha’is of their economic livelihoods.”

It is important to note that the venture was started decades ago by the Baha’is as a way to remain in their village and continue to have access to a means of livelihood despite various economic limitations placed on them by the local authorities, including denying their purchase of certain goods and services, added Ms. Ala’i.

Despite the equipment being returned the following day, the authorities demanded verbal assurances from the locals that they would not allow the Baha’is to produce rosewater in the future, thereby denying them their means of livelihood.

Mazgan is a village in Ghamsar, Kashan, and contains a large number of Baha’is who trace their history to the early days of the establishment of the Baha’i Faith in Iran when Shaykh Mazgan, a local congregational prayer leader, embraced the Faith. Ever since, the local population have been subjected to discrimination and oppression, which was further escalated following the Islamic revolution in 1979.

[The content above was transcribed from the original document. If you find any typographic error, kindly email us using the 'Contact' page form.]

[i][Amaken (Public Places Supervision Office):  Responsible for the enforcement of accepted moral codes in places of work and other offices.]

The "Iran without hatred" campaign: why and how did it come about

Simin Fahandej: They want to cripple the Baha'i community by increasing pressure on them

Baha'i International Community: Persecution of Baha’is has intensified in Iran

Baha'ism in Iran: Baha'i International Community asks for immediate release of Baha'i prisoners and other prisoners of conscience

Ferghe News: Anniversary of the fake convention of the rights of children in presence of Baha'i and Christian chiefs

Independent Persian: Efforts to shut down the Baha’i care home in Karaj

Adyannet: Is Iran to be blamed for the arrest of Baha'is in Yemen?

Baha’ism in Iran: Campaign for defending the imprisoned Baha’i leaders

Report in Adyannet website on statement by Baha'i representative, Simin Fahandej in Geneva

Adyannet: Complaint of Baha’is to the UN

Letter from the Principal Representative of the Baha’i International Community, Bani Dugal, to President Rouhani

BBC Persian: Fereshteh Ghazi: Difficulties of being a Baha’i in Iran

Iranhumanrights: BIC spokesperson: Efforts of government to alienate Baha’is from others failed in regime’s prisons

Ban Ki-moon: UN High Commissioner on Human Rights expresses concerns about the situation of the seven leaders of the Baha’i community

Destruction of a Bahai' family house in Abadeh