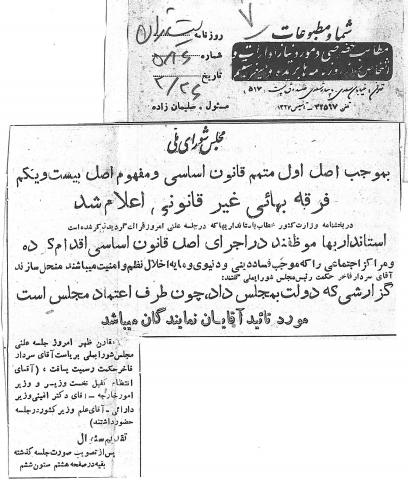 According to the first article of the amendment to the Constitution, and the meaning of Article 21, the Baha’i sect was proclaimed illegal. This was mentioned in the circular of the Ministry of the Interior, addressed to the governors general, which was read at the public session. The governors general are bound to implement the articles of the Constitution and close the centres of [Baha’i] gatherings, which are the cause of religious perversity and a source of disruption of order and security.

The public session of the National Consultative Assembly was presided over by Mr. Sardar Fakher Hekmat at around noon today (Mr. Entezam, deputy prime minister and minister of external affairs; Dr. Amini, minister of finance; and Mr. Alam, minister of the interior, were also present at the meeting).

Presentation of the request

Further to the approval of the agenda of the last meeting… (Continued in page 8, column 6)