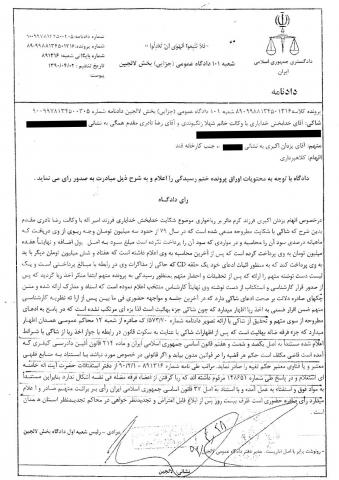 Branch 101 of the Public (Penal) Court of Laljin Division

Having reviewed and considered the evidence and the case documents, the court hereby concludes the hearing and renders a decision as follows:

K/573/70 issued by Branch 12 of the Public Courts in Hamadan, the plaintiff admitted that he was a member of the perverse sect of Bahaism.  Subsequent to the admissions of the plaintiff, considering the absence of codified law with respect to license to exercise usury under the given circumstances, pursuant to Article 167 of the Constitution of the Islamic Republic of Iran, and Article 214 of the Hearing Procedures Act in criminal matters, which states that the judge is bound to endeavor to adjudicate each case on the basis of codified law, and in case of the absence of such law, he has to deliver his judgment on the basis of authoritative Islamic sources and authentic fatwas, reference was made to letter number 891316 – 1 Ordibehesht 1390 [21 April 2011] from the office of His Holiness Ayatollah Khamenei, who had said in letter reference 148651 that usury against members of the perverse sect is inconsequential.  Therefore, pursuant to the above referenced articles and the religious advice, as well as Article 37 of the Constitution of the Islamic Republic of Iran, the court hereby issues an order of acquittal for the defendant.  This court order was issued in the presence [of the parties] and can be appealed within 20 days of its issuance at the courts of appeal in the Province of Hamadán.