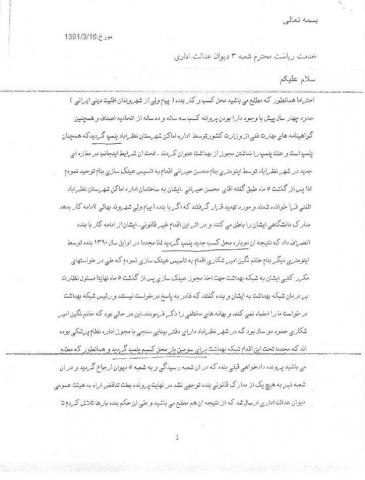 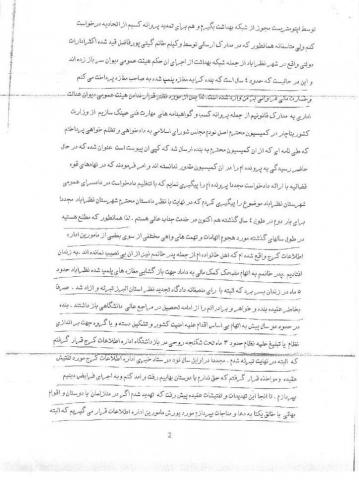 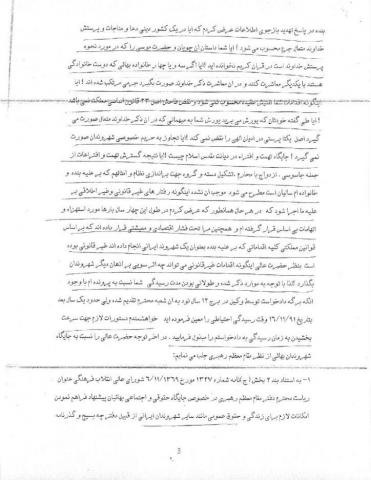 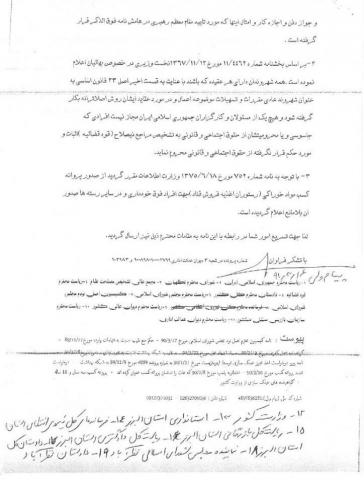 Esteemed Head of the Court of Administrative Justice

Peace be upon you,

Respectfully, I (Payam Vali, from the Iranian Citizens of Religious Minorities) submit that approximately four years ago, as you are aware, notwithstanding that I had a three-year work permit and a ten-year permit from the trade union, as well as a diploma of technical skills from the Ministry of the Interior, my shop was sealed. The reason for this, I was told through the Public Places Supervision Office of Nazarabad, was that I did not have a permit from the Health Department.

As a result of [the foregoing], I decided to establish an eyeglasses shop under the name Towhid, in new premises in Nazarabad, through an optometrist named Mohsen Heyrani.  Five months after this, Mr. Mohsen Heyrani was summoned by phone to the Public Places Supervision Office and was threatened that if he continued working with me (Payam Vali, Baha’i citizen), his university documents would be invalidated. [Because of] this illegal act [by the Public Places Supervision Office], he stopped working with me; as a result, the new shop was sealed.

As you know from my previous plea for justice that was being investigated in the [court] and was referred to Branch 5 of the Court of Administrative Justice, even though no attention was paid to my legal documents, owing to a disagreement between the judges, the case was ultimately referred to the General Forum of the Court of Administrative Justice, whose decision you are aware of. In accordance with that aforementioned decision, I tried several times to obtain a permit from the Health Department Network through [other] optometrists, and also to apply for an extension to my work permit from the union; yet, unfortunately, as set out in written statements in the files of my lawyer, Mrs. Giti Pour-Fazel, , most of the government offices in the City of Nazarabad, such as the Health Department Network, have declined to carry out the decision of the General Forum of the Court of Administrative Justice.

For approximately four years now, I have been paying rent to the owner of the sealed shop, which has caused me significant economic loss. After the General Forum of the Court of Administrative Justice ignored my legal documents, such as my work permit and Opticians’ Diploma of Technical Skills from the Ministry of the Interior, I was compelled to lodge a complaint and plead for justice at the [Commission for the Implementation of] Article 90 of the Islamic Consultative Assembly. I received a letter from that respected commission, a copy of which is enclosed, indicating that at the present time, it was not possible to investigate my case in that commission, and I have been asked to refer my case once again to the judicial courts for investigation and follow-up. Accordingly, I prepared my plea for justice and lodged it at the public court of the City of Nazarabad. Finally, with the consent of the esteemed public prosecutor of the City of Nazarabad, I am here before this court for the second time within the last four years.

As you are well aware, during the previous years, I have been subjected to many baseless accusations and calumnies by some of the officials of the Intelligence Office of Karaj. My family and my father-in-law have also been the troubled recipients of the same accusations, and we were all imprisoned. My father-in-law was ridiculously accused of having economically helped his son-in-law to reopen the sealed shop in Nazarabad, and for this he was kept in prison for five months. Later on, in accordance with the fair decision of the Court of Appeals of the Province of Alborz, he was acquitted and freed.

Owing solely to our belief, my sister, brothers, and I were not permitted to continue our tertiary education at university. Two years ago, I was falsely accused of having acted against the security of the country by having gathered a group to overthrow the regime, and for this, I underwent psychological torture for three months at the detention centre of the Intelligence Office of Karaj. Finally, I was acquitted. Again, at the beginning of the year 1390 [2011], I was investigated on account of my beliefs at the Information Office of the Department of Intelligence of Karaj, and warned that I had no right to communicate with my fellow Baha’i friends, and am not supposed to carry out my religious obligations. This matter went to the extent of threatening that my home would be raided by Intelligence officers if, together with my friends and Baha’i relatives, we gathered to worship the One True God and say prayers.

In answer to the threat of the Intelligence interrogator, I asked, “Is it a wrongdoing in a religious country [Iran] to worship God? Have you not read in the Quran the story of Moses and the shepherd regarding the way of worshipping God? If three or four Baha’i families, who are close friends and associate with each other, and in that relationship, they mention God, have they been committing an offence? Is this not considered as investigating one’s belief, and how is it in breach of Article 23 of the nation’s Constitution? Does not your own declaration that you will raid a meeting in which there is mention of Great God, go against the principle of worshipping the One True God? Is this not a transgression of the private rights of the citizens? Where does the holy Islam stand when it comes to accusation and calumny? What is the result of extending accusations and calumnies to [include] espionage, marriage with unlawful intimates, arranging groups to overthrow the regime and other [illegal actions], to which  my family and I have been subjected for many years? Is it not unlawful and unethical, as I have already said that during these past four years, time and again we have been subjected to ridiculous and baseless accusations and I have been put under severe economic hardship and other pressures, and that, according to the laws of the country, as an Iranian citizen, all actions taken against me have been unlawful?”

In your view, what kind of negative influence can such unlawful actions wield on the thoughts of other citizens? In light of the matters mentioned above and the lengthy time frame for the investigation of my case, and given the statement of appeal that was lodged in Esfand 1390 [February 2012] and was handed to the respected [court] and after the lapse of about a year, on 16 Bahman 1391 [4 February 2013] was marked “for possible investigation”, I respectfully request you to issue the necessary orders to expedite the investigation of my claim for justice. In conclusion, I would like to bring to your attention the views of the supreme leader about the position of the Baha’i citizens:

[Under the circumstances mentioned above], in order to speed up my case as set out in this letter, [a copy of this letter] has been sent to the relevant authorities.

Advisory opinion of Deputy Prosecutor General: The sealing of the commercial units belonging to Baha'i's has no legal basis

Baha’i businesses sealed by the government

HRANA: 32 Baha’i shops in Sari closed illegally for over 1700 days

HRANA: Letter from Ghanbar-Ali Ghanbari, father of a Baha’i prisoner in Sari

Case for murder of seven Baha’is goes to court

Violent expulsion of Baha’is from their homes