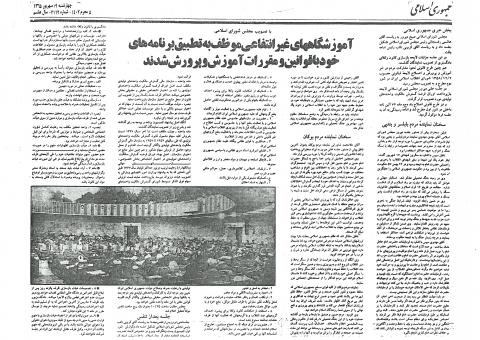 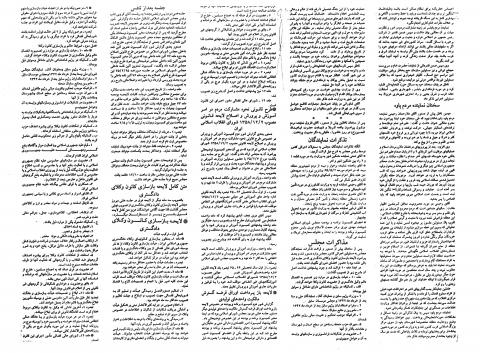 With the Approval of the Islamic Consultative Assembly, Non-Profit [Educational] Institutions Ordered to Bring Their Educational Curricula in line with Ministry of Education’s Laws and Policies

The news section of the Islamic Republic [Newspaper]:

Yesterday morning, the Islamic Consultative Assembly held a meeting, presided over by Mr. Hashemi Rafsanjani, Head of the Islamic Council.  The meeting continued under the chairmanship of the Deputy, Mr. Karroubi.

Discussions of the Consultative Assembly

After holding an opening remarks session and reading the [formal] notices of members [of parliament] to the government authorities, the Consultative Assembly, in the presence of the Guardian Council, entered into session and discussed the bill for “Restructuring of the Bar Association” that had been held over from the previous meeting,.

First, Article 10 was read, and since it did not have any suggested amendments, it passed as originally written, as follows:

Article 10- The Committee for Restructuring will permanently dismiss a lawyer from membership in the Bar Association under the following conditions. . .

…6- Membership in the perverse sect, which, by agreement of all Muslims, has been recognized as being outside Islam, or membership in organizations whose manifesto or constitution is based on the denial of the Divine religions.