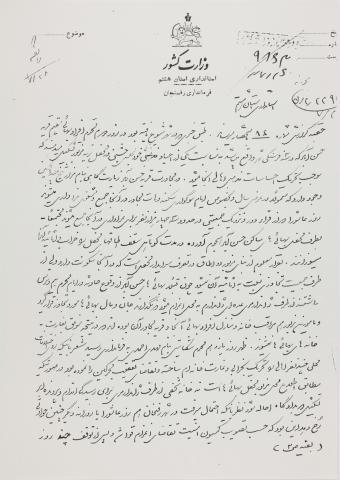 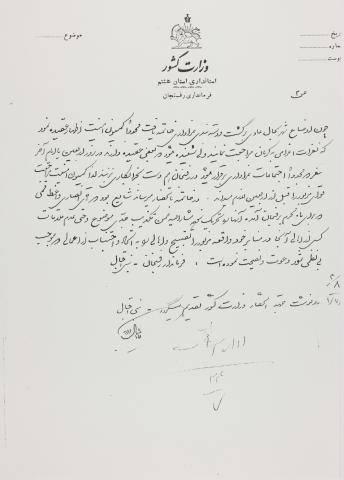 Provincial Government of the Eighth[1] Province

Office of the Provincial Government of the Eighth Province:

Regarding report number 86, this is to respectfully inform you that, based on the news that was spread in the city [Rafsanjan], on the second day of Muharram, Baha’is of Hasanabad Village, which is about 18 kilometres from the city, celebrated one of their religious festivals in their mahfel [Baha’i Centre]. This act aroused the religious fervour of the residents.

In the vicinity of Hasanabad there is the shrine of Sheikh Abdolhosein, where, during the year, and especially on days of the religious mourning, inhabitants of surrounding villages gather and perform religious rituals. On the day of Ashura about three to four thousand people from the surrounding villages, near and far, gathered to mourn the martyred Imam.  They then collectively attacked the mahfel of the Baha’is residing in Hasanabad, and in a short time destroyed the ceilings of the rooms and burned the furniture.  Evidently the furniture in the two rooms [in which the custodian lives] were not touched.

As the Baha’is of Hasanabad feared for their safety during the month of Muharram, the gendarmerie deployed a number of gendarmes to protect the lives and properties of the Baha’is; therefore, the mob was prevented from looting the Baha’i homes in Hasanabad and a neighbouring village.

At noon on 11 Muharram, Mehdi Ahmadi sent a complaint to the regional governorate and requested the prosecution of the instigators, suggesting that, based on the local conflict, the residents have incited a few people to attack and loot his residence, although, according to the information, the above-mentioned building is the [Baha’i Centre] mahfel of the Baha’is and not his private home. The gendarmerie has moved to investigate the matter and prepare a report [indicating] that the case could be submitted to the court.

Noting the possibility of similar incidents on Ashura or other religious days in the City of Rafsanjan, with the approval of the public security committee, we requested that security forces be deployed to this area, as well. As the local situation returned to normal and the mourning rituals came to an end, the same committee asked the security officers to return to the City of Kerman. However, some believe that on the day of Arba’een[2] or the last days of Safar[3], when the crowds gather for more days of mourning, some might again start a riot and disrupt the peace. Therefore, the same committee feels it is necessary to ask the security forces to return before the Arba’een.

In closing, we respectfully inform your office that rumour has it that Mr. Ansari, a preacher from Qom who came to Rafsanjan for the month of Muharram, instigated the mob’s actions. He has emphatically denied the allegations, and has denounced such destructive behavior, which disrupts peace and order, and from his pulpit invited the audience to promote unity.

[2] Arba'een, a Shia Muslim religious observance that occurs 40 days after the Day of Ashura.

[3] Second month in the Muslim calendar

HRANA: House of another Baha’i citizen in Tehran raided

HRANA: Houses and shops of 3 Baha’i citizens were raided in Karaj

HRANA: A number of Baha’is detained in Marlik, Tehran

Conditions of a Baha'i couple, Mojdeh Eghterafi and Houshmand Talebi, in prison

US Congress condemns persecution of Baha'is in Iran

Nasim Samimi and Farhad Norouzian summoned and their houses searched

HRANA: Omid Ghanbari’s house and shop were raided in Sari

HRANA: Houses of Feizollah Rowshan and Sohrab Zahedi were raided in Sari