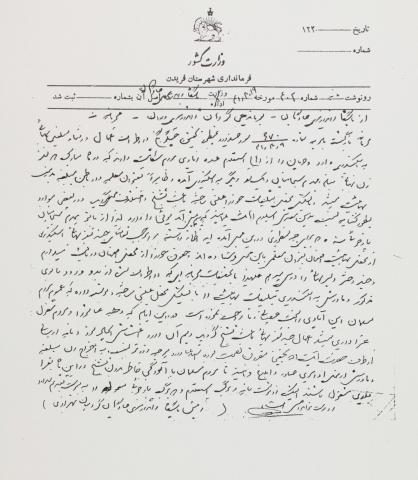 Copy of the letter of the Police Station of Chadegan

To the Commander of [Gendarmerie] Police Station of Daran

Respectfully, I would bring to your attention that, following mandate number 670 of 9 Khordad 1341 [30 May 1962], for the purpose of investigating the circumstances around the actions and behaviour of the Baha’i teachers [propagators], [I] entered Eskandari and requested information from the residents. A lot of people complained that during the sacred month, two Baha’i women entered Eskandari, one by the name of Hamdam Sobhaniyan, and another one. Apparently they are teachers, but inwardly they are Baha’i teachers and teach Baha’ism.

By organising gatherings, they have made public their propaganda, which has resulted in tension and conflict in the area. Sometimes [they will] make remarks that are insults towards the sacred religion of Islam, and this might result in a malicious incident. Therefore, Mrs. Hamdam Sobhaniyan was asked for what purpose she had come to this place, to which she responded, “I have been sent here as a teacher by the Assembly of the Baha’is of Esfahan, at the request of some Baha’is of Eskandari, and I receive my salary from the Assembly of Isfahan. I teach a few Baha’i girls and boys.”

Moreover, [according to] secret investigations that have been conducted since the arrival of this lady and her mother in Eskandari, she has openly propagated Baha’ism, which has angered and created uneasiness amongst the Muslims of this village. At this time, which is the tenth day of Ashura, and people are mourning, the actions of a few Baha’is have caused tension and there is a fear that riots may start, and the letter from the honourable Ayatollah Najafi was correct. It is requested that orders be issued as early as possible, and conveyed for the eviction of this Baha’i teacher and her mother from this area, that people may find peace of mind and engage without tension in [religious] mourning during this month.

The copy of the letter and two pages of the interrogation that was conducted are enclosed [herewith].

Head of the Police Station of Chadegan, Sergeant Behzadi

Copy is identical to the original

Baha'i activities in Eskandari village in Fardian to be stopped