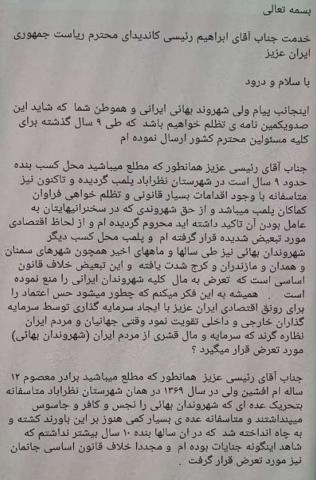 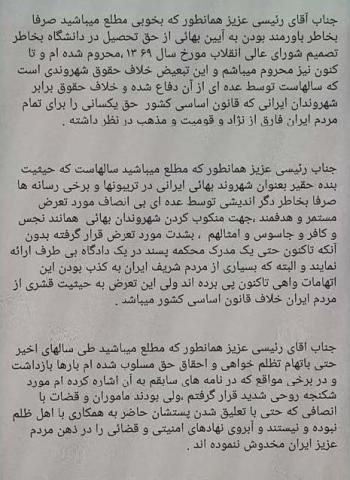 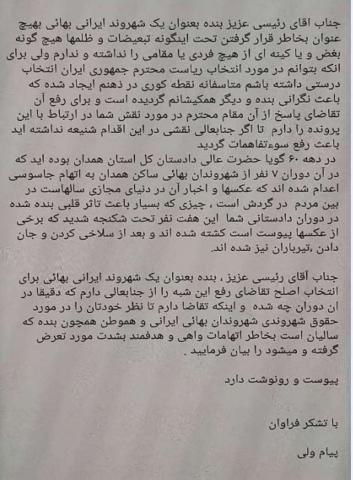 With salute and greetings

I [am] Payam Vali, Baha’i citizen of Iran and your compatriot; this may be the 101st letter of complaint against injustice that I have sent to all the country’s esteemed authorities.

Dear Mr. Raiesi, as you [may be] aware, my business premises in Nazarabad have been sealed for about nine years, and despite several legal actions and pleading for justice, are still sealed, and I have been deprived of my “Citizens’ Rights”, of which you have claimed in your speeches to be an agent. I have been severely discriminated against economically. The sealing of the business premises of Baha’i citizens in cities such as Semnan, Hamedan, Mazandaran and Karaj has intensified in recent years and months; this discrimination is in violation of the constitution, which prohibits any attack on the property of any citizen of Iran. I always think, how can a sense of trust be created for investment by local and foreign investors and the economic prosperity of dear Iran, when the property and wealth of a section of Iranian people (Baha’i citizens) is violated?

Dear Mr. Raiesi, as you [may be] aware, my innocent 12-year-old brother, Afshin Vali, was, unfortunately, killed, and [his body was] thrown down a well in 1369 [1990-1991] in Nazarabad by those who were provoked by a group that considered Baha’is unclean, infidels and spies, something that, sadly, a few still believe. I was only 10 in those years where I witnessed these crimes, and once again, and in violation of the constitution, our lives were also attacked.

Dear Mr. Raiesi, as you [may be] aware, only for being a follower of the Baha’i Faith, by the decision of the Supreme Revolutionary Council in 1369 [1990-1991], I was and still am denied access to higher education. This discrimination is in violation of the constitution, which guarantees equal rights for all Iranian citizens, regardless of race, ethnicity or religion.

Dear Mr. Raiesi, as you are aware, for years my dignity as a Baha’i citizen of Iran has been the target of ferocious and continuous attack in some media organisations by some unfair individuals, merely for having different beliefs. [I have been] called unclean, infidel, spy, and so on, without any evidence having been produced that can be acceptable to an unbiased court.  Of course, many of the honourable people of Iran have become aware of the baselessness of such accusations by now, but this attack on the dignity of a section of society is in violation of the country’s constitution.

Dear Mr. Raiesi, as you are aware, I have been detained numerous times in the recent years for merely pleading for justice and restoration of the rights of which I am deprived, and as I have stated in my previous letters, I have been subjected to vicious psychological torture. But there were fair-minded officers and judges who, even despite being suspended from their jobs, were not and are not prepared to collaborate with the supporters of injustice and [have] avoided tarnishing the reputation of security and judicial institutions in the sight of the dear people of Iran.

Dear Mr. Raiesi, as a Baha’i citizen of Iran, I harbour no resentment or grudge against any individual or official for having subjected me to such discrimination and injustice. But sadly, there is a burning question in my mind that is a cause for concern for me and my co-religionists, which I humbly ask you to answer about your role in a case, and if you played no part in a heinous act, [hoping that] you will dispel the misunderstandings and enable me to choose the right person in the presidential election.

It appears that in the 60’s [80’s] you were the public prosecutor general of Hamedan at the time when seven Baha’i citizens of Hamedan were executed on the charge of espionage, the news and pictures of which people have been circulating on the internet for years. What has deeply saddened my heart is that during your tenure as public prosecutor, these seven individuals were killed by being brutally tortured (some of the pictures are enclosed) and executed by firing squad after being mutilated.

Dear Mr. Raiesi, as a Baha’i citizen of Iran, I ask you to clarify this doubt as to what exactly happened at that time so I can choose the most eligible [candidate]. And I also request that you express your opinion about the “Citizens’ Rights” of the Baha’is of Iran and a compatriot like me, who, for years, has been and is severely attacked because of baseless targeted accusations.

Attachments and copy are enclosed.

HRANA: Payam Vali's business has been blocked for nearly 12 years

Systematic persecution of Baha'is in Iran; a conversation with Payam Vali

HRANA: Payam Vali still not allowed to work, a decade after closure of his business

HRANA: Letter from Payam Vali to the presidency candidates

Payam Vali's complaint about closure of his business

Payam Vali's formal complaint about closure of his business

Payam Vali's complaint about closure of his business

Three doctors support their Baha'i colleague, whose license to practice is cancelled

Bahram Nabi-Elahi's request to have his pension reinstated

Letter by Navid Roshanabadi, nine-years old, to the President

Letter from Baha’i community of Kermanshah to Prime Minister: Stop persecution of Baha’is

Appeal for justice to President Khamenei