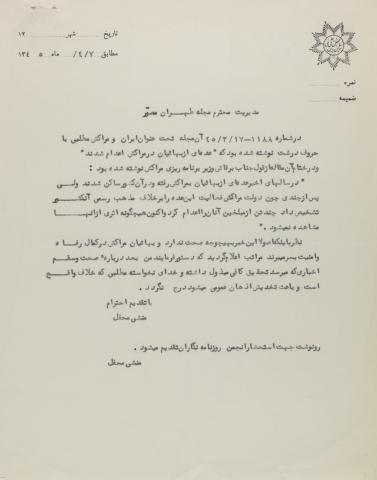 [This is to] respectfully convey that, in issue number 1188 of 17 Khordad 1345 [7 June 1966] of that magazine, an article was printed under the title, “Iran and Morocco”, in capital letters, [saying] that some of the Baha’is in Morocco had been executed, and at the end of that article Mr. Barghash, the minister of planning of Morocco, was quoted as saying, “In recent years, some Baha’is have gone to Morocco and have taken residence there, but since the government of Morocco recognized their activities as being against the official religion of their country, after a while, a few of their teachers were executed and there is currently no sign of them there.”

Since this news is not true at all, and the Baha’is of Morocco are living in complete prosperity and safety, this is communicated so that you may order a thorough investigation to be carried out about the truth or falsehood of the news received, so that, God forbid, no false statements are made, which can cause confusion in the public mind.

The Secretary of the Assembly

Secretary of the Assembly

Response to the accusations on radio broadcasts against Baha’is

Baha’i community of Iran replies to accusation in Ettelaat newspaper

Statement of Baha’i community of Iran on Baha’i institutions

The Baha’i community of Iran responds to Ettelaat newspaper

Letter from Baha’i community of Iran to Kayhan newspaper: Baha’is in Iran do not get involved in politics

Letter of Baha’i community of Iran to Ayatollah Ghoddusi: Iranian Ambassador in London falsely accuses Baha’is of opposition to government

Letter from Baha’i community of Iran to Gozaresh Rooz Magazine: Baha’i faith is not political