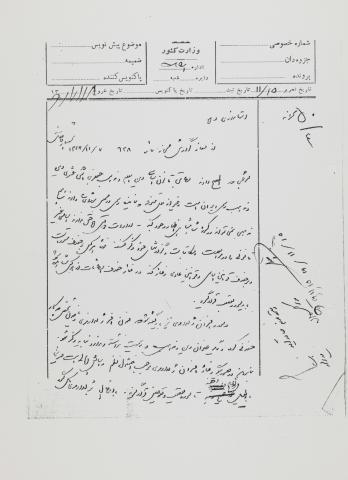 Governorate General of the Tenth Province,

The contents of the confidential report number 928 of 7 Bahman 1329 [27 January 1951] were understood. As they are aware, according to the Constitution, the official religion of Iran is Islam and the faction of Jaafari Shi’i of the Twelfth Imam, and except for those different groups who have their official representatives in the National Constitutional Assembly, no other religion in the imperial country can claim legitimacy. The government offices have no right to mention the illegal names [Baha’is] in their correspondence, communications and reports. Therefore, whoever would behave against the stipulated constitutional laws or the laws of common understanding, and/or take actions in contradiction to law and order, should be prosecuted.

Regarding the ranking officers of the gendarmerie, it should also be mentioned that such and such gendarmerie officer, by mentioning the name of the person, has committed wrongdoing. Thus, the name of a religion and belief that is not legitimate must not be mentioned. Therefore, if the behaviour of ranking officers of the gendarmerie becomes the cause of disorder and complaint of the inhabitants, it should clearly be presented with proofs, so they can be prosecuted or replaced.

[Handwritten notes on the right side of the page]

Minister of the Interior