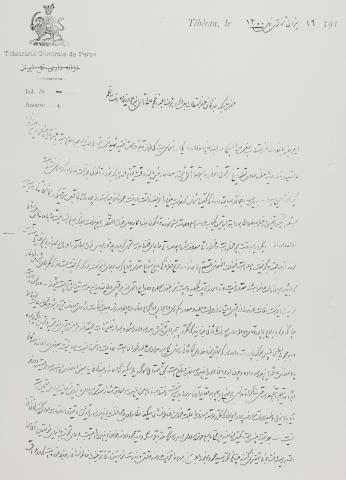 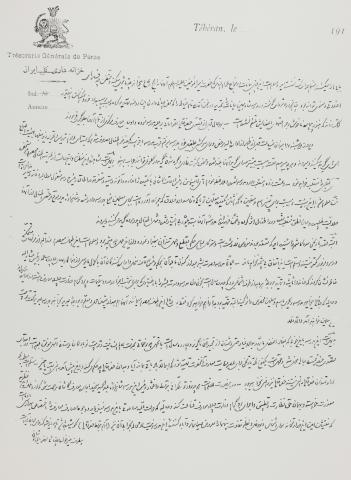 Treasury of Iran [crossed out]

To [a chain of honorifics of esteem, respect and courtesy] His Excellency Mr. Amir Alam, the minister of education, may his protecting shadow be extended,

Yours truly is associated with and much obliged to your people and is one who was favoured and graced by the late Montakhabod-dowleh, and the absence of your acquaintance did not allow me to present the condolences and the compiled elegy of the deceased, by Mr. Vasighol-Sultan, the then finance minister, and I have not been content to inconvenience your esteemed person so far.

Now, I necessarily bother you. Evidently, you are aware that a group of people who regard service to humanity as their religious obligation, when even mentioning the name of the “new [secular] school”, attracted cursing and discrediting, and, bearing the risk of death and loss of property, established a school named Vahdat-e Bashar fourteen years ago in Kashan, and continued with their contributions to uphold this extraordinary and selfless service to the world of humanity, not to mention the extent of dilemmas and the risks encountered, the damages suffered to sustain the school, the overwhelming expenses undertaken, and the disasters endured,  And there is no need to mention that, the virtue of the “first come-first served” is evident here. They undertook this sacred initiative under such dangerous circumstances and strove hard for this great service, which would not have been possible except for the devoted people who are willing to sacrifice their lives and property. And to this day, about 120 divinely entrusted innocent children of all ethnic groups and tribes are taught and educated in this school. And, of course, the founders of this service have indispensably abided by the necessary rules, such as [obtaining] a licence from the government, [providing for] the issuance of a formal degree, implementing the programme of the Ministry of Education, and seeking the supervision of the local education authorities and the like.

So, if you were to refer to the biennial reports of the Kashan Education Bureau, [representatives of] which have repeatedly and unexpectedly entered the school for inspection, [you would find that] after each in-depth inspection of any kind, they had nothing to say except praise and admiration. And despite being unjust, they reported to the Markaz that [the Vahdat-e Bashar] School was the best school in Kashan [and that it] equalled Tehran’s top schools. At most, they [connected] some of the contributors or members of the school board with Baha’ism, and because yours truly is aware of the affairs of the school, I swear to the Almighty God that any belief that contributors or some members of this school may have does not interfere in any way in the school’s teaching and learning, and even religious discussions are forbidden; their beliefs are not related to the school at all. The foundation of this school is in accordance with the holy rites of Islam, and the teaching of Shari’a is one of the duties of the teachers.

Is it not the duty of the knowledge-nurturing government of Iran, which has repeatedly reminded its nation of educational development, to support and protect this school, and to encourage and reward the services of its administrators? However, it is a matter of a number of local instigators in the name of the Islamic seminary and under the leadership of Mulla Baqher Mesgar and Seyyed Mahmoud Rawza Khan, pursuing this school, and they do not neglect any kind of seditious conspiracy to destroy and persecute its founders, so much so that the said Seyyed Mahmoud has, at the pulpit, repeatedly encouraged the people to loot and destroy the school and murder its founders, [saying to] the rebels, “They kill the Babis in Iraq; why are you sitting around silently?” And it is evident how such statements influence the common people that are called by Imam Ali “hamajor- ra’a” [wicked, lowly and helpless people, like the flies] and how they would cause moral and spiritual corruption, like during the past Ashura at the school of the shah, when he had repeated the same statement, and since, at that  same time, Ali Khayyat, who had been offering tea, had questioned its reason, they had badly beaten him and his companions, to the extent that the poor man is still unwell and his bodily injuries are not yet healed. However, before His Highness took office, actions were taken against the school and the central education authorities prevented all of them.

Yesterday, Monday, 17 Mizan [Mehr] [9 October], I left the finance office, heading to school to see my child. In the vicinity of the school, I encountered about one hundred children holding school bags under their arms, all crying and walking in groups as they left, and the more I asked why, the more they cried and, gulping, were unable to speak. Obviously, observing such a scene and [seeing] the state of this group of innocent children would upset and touch any person. Terrified and upset, I entered the school and observed that Mr. Agha Seyyed Hassan, the head of Kashan Endowment [Education], along with a group of gendarmes, mullas, seyeds and others, was demanding the [school’s] books, and was in conversation in the office of the school’s headmaster.

It also turned out that with this delegation, and [in a fearsome manner] he entered the school to change the name and the teachers of the school and to appoint a number of opium-addicted and corrupt teachers to replace the current schoolteachers. And since the prince headmaster asked them [the students] for forgiveness and was overwhelmed while speaking, this touched the children’s hearts. Finding out that their school was going to be closed, they inevitably started crying, as if they had lost their own father, and left the school.

You have, of course, heard the historic tale of the Cedar of Kashmar, which was believed to have been planted by Zoroaster. The Abbasi Khalifat issued a decree to his deputy to fell the tree and carry its trunk to Baghdad. What was the result of this action? It is evident that these innocent children are not less worthy than the nesting birds in that cedar, and no doubt this action would be in vain.  Following the removal of its sign board, by order of the head of endowment [Education Department] the Vahdat-e Bashar School is now dissolved [closed].

Its administrators desperately reminded his chief [director] of their fourteen years of sacrifice, pointing out [to him] that the house, furniture and monthly budget had been set up by individuals who toiled for fourteen years and had been administering the Vahdat-e Bashar School for fourteen years with the authority vouchsafed to them for selecting the necessary elements within the framework of education and training programme of the esteemed Ministry of Education. And now you want to set up another school, differently named and with special teachers? Of course you will also have to fund it.

Only these innocent children remain for Your Honour. After determining the new location, teacher and budget, they will come to the new school under the education of these teachers; it is this or nothing.

Obviously this great school, according to the saying, “The greatness must be attested to by the outsiders,”  which has inevitably been praised even by the enemies for fourteen years, and with great efforts has succeeded in serving the world of humanity and in training the children of the Divine Garden, was closed at the outset of the term of your office and it is probably a kind of historical stain for the era of His Honour’s Ministry of Education, which will remain forever.

I wonder how Your Honour’s conscience decides and whether it is satisfied with the outcome. It is certain that since Your Honour’s devotees are not satisfied, your honour will not be satisfied either. In this case, it is necessary to submit a telegram as soon as possible through and in honour of the head of this school, Prince Abdul Hamid [illegible], to the Ministry of Education of Kashan to apologize for this  [decision] and be satisfied with the right of supervision and concordance and performance of the esteemed Ministry of Educations [curriculum].

Now that the respected government is not [financially] assisting the school, and the funds for education have been allocated to [other] schools, [although] the trusted inspectors of this ministry - except for those stakeholders and self-interested people - have recommend otherwise, and this school [is not being developed], it is hoped that the school will not be ruined, at least by Your Excellency

What is your world-adorning opinion?

Member of the Kashan Finance [Department]

Iranwire: BIHE; story of an unofficial but reputable university

Iran Wire: Jamaloddin Mostaghimi, a Baha’i scientist, and the father of anatomy in Iran

Bahais of Iran; Qamar-ol-Moluk Seif, a life of service and death in exile

Iran Wire: Loving your homeland: the Baha’i physician of Nasir al-Din Shah during the Plague

Article in Iranwire website on Dr Masih Farhangi: executed for his love for Iran

Article in Iranwire on Dr Naser Vafaie, executed after years of service to people of his country

The interrogator said, we don't let you go to university, simply because you are a Baha'i

Iranwire: Hardships and hopes of Kayvan Rahimian, a Baha’i teacher

Iranwire: Women who made a difference in Iran: Jinous Mahmoudi

Letter from Saman Lotfi to Cycling Committee of Najafabad

Iranwire: Street art campaign in defence of Baha’is of Iran

Saman Lotfi appointed as the Head of Cycling Committee of Isfahan

Iranwire: Baha’is are arrested for teaching and studying at Baha’i Institute for Higher Education

Letter by a Baha'i student to imprisoned professors of Baha'i University

HRANA: Farhad Sedghi goes back to prison after furlough

HRANA: Anniversary of the raid on Baha’i university

HRANA: A number of Baha'is associated with the online university have been accused of acting against national interest

Everyone has the right to education

Baha’is of Ivel donate money for building a school

Baha’is of Ivel donate money to support victims of war

Baha’is of Ivel donate money to support victims of war

Receipt of farming tax collected from the Baha'is of Ivel

Etelaat newspaper colleague, who had a heart failure, says he owes his recovery to the dedication and humanitarian efforts of Dr Hosein Naji and his colleagues in Missaghie Hospital

Two schools set up in Sangesar were closed down, as they had no license

Order to investigate reports that two Baha'i schools, for boys and girls, have been set up in Sangesar

Report on two primary schools, for boys and girls, set up by Baha'is in Sangesar

Closure of the Baha’i kindergarten in Najafabad

Report on schools in Kashan

Letter to an MP and the head of Kafshgar Kola school

Letter to Ministry of Education to close Kafshgar Kola school

Letter from Education Minister about the situation of Kafshgar Kola school

Letter from Badiollah Mesbah to the head of Women’s Education

Department of Education to decide about ‘Vahdat-e Bashar’ School

Telegram to Chief Minister about opening of Vahdat-e Bashar school

Letter from Ministry of Education about Vahdat Bashar school

Vahdat-e-Bashar School handed over to Department of Education

Letter from Molla Habibollah to Ministry of Interior

Demand for principal of Vahdat Bashar school to be dismissed