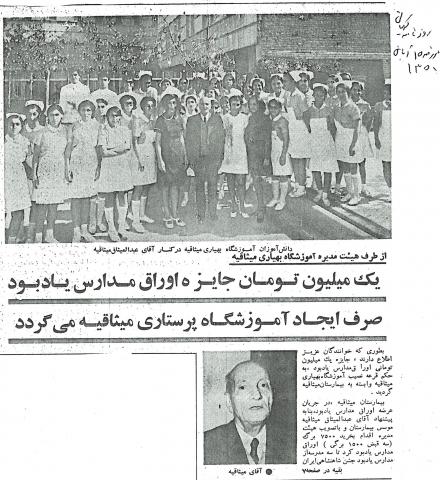 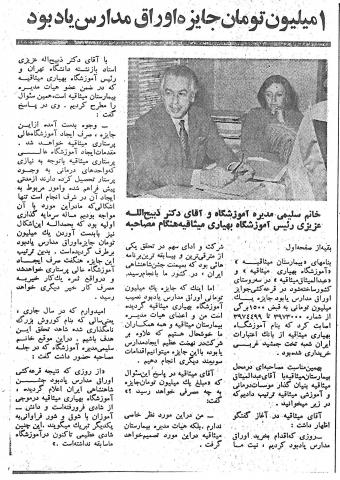 One million toman, the Memorial School Bonds Award, will be spent for the establishment of Misaghieh Nursing School.

As our dear readers are aware, the one-million-toman Memorial Schools Award, determined by a draw, went to Misaghieh Paramedics School, affiliated with the Misaghieh Hospital.

Please read below the interview at the Misaghieh Hospital with Mr. Abdolmisagh Misaghieh, the founder of Misaghieh Treatment and Educational Institutes that we arranged on this occasion.

At the beginning of the conversation, Mr. Misaghieh stated, “The day we decided to buy the Memorial Schools Bonds, our intention was to participate in and pay homage to achieving one of the most modern and unprecedented plans ever to happen in our country, in honouring Iran’s imperial celebrations. However, now that the one-million-toman Memorial Schools Bonds Award has been offered to Misaghieh Paramedics School, the members of the Misaghieh Hospital Board of Directors and I, and all our colleagues, are happy to render other beneficial works with this award, in addition to participating in the magnificent movement of establishing Memorial Schools.”

In response to the question: “What will the one million tomans be spent on?” Mr. Misaghieh said, “I do not have any specific idea in this regard, but the Misaghieh Board of Directors will decide.”

We asked the same question of Dr. Zabihollah Azizi, retired professor at the University of Tehran and the president of Misaghieh Paramedics School, who is also a member of the Misaghieh Board of Directors.  He replied, “The money received through this award will be spent on the establishment of the Misaghieh Nursing School. Considering the needs for educated, qualified nurses at all treatment centres, preparation for establishing the Misaghieh Nursing School started a while ago and are under way. The only problem we were facing in this regard was the initial capital, which, thank God, was resolved by getting this one-million toman Memorial Schools Award. Therefore, this enormous award will be spent in establishing the nursing school; in fact, the benefits of one charity will be used for another charity. I hope that this year, the year that is named after Cyrus the Great, we will witness the realization of this goal.”

At this time, Mrs. Salimi, the school principal who was present at this interview, said, “Since the day that results of the draw for the Imperial Celebrations Memorial Schools Bonds were announced, the Misaghieh Paramedics School has been caught up in a wave of happiness; the students congratulate each other with great joy and excitement. Such great happiness is unprecedented in our school.”

[Caption under the photo on second page]: Mrs. Salimi, the principal of the school and Dr. Zabihollah Azizi, the president of Misaghieh Paramedics School during the interview

Letter of appreciation to Ziaollah Motearefi, manager of farming complex in Semnan

Request for acknowledgement and encouragement for Dr. Ahrari

Thanking Baha'is of Isfahan for helping flood victims in Khuzestan

Acknowledgemt of fulfilment of duties by Education Department of Abadeh

Dr Ezzatollah Forouhi commended for his work at Kamali Hospital

Letter of appreciation to Mohammad Jafar Rahmani, Manager of Melli Bank in Langaroud

Rumors about religious publicity in ‘Vahdat-e Bashar’ school are untrue