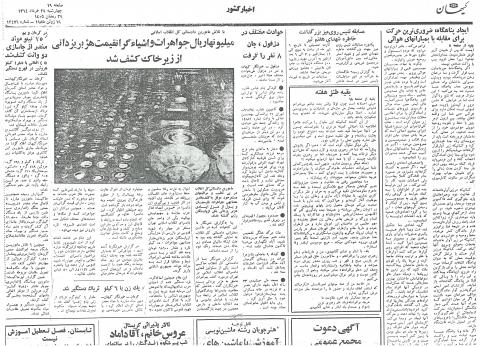 With the efforts of the agents of the Prosecutor General’s Office of the Islamic Revolution, millions of rials’ worth of jewels and precious objects belonging to Hojabr Yazdani were discovered under the ground.

A judicial official of the Office of the Prosecutor of the Islamic Revolution of Tehran told reporters about the discovery of jewelry belonging to Hojabr Yazdani: “As you know, the courts and prosecutors’ offices of the Islamic Revolution are working constantly, in connection with the fight against spying and counter-revolutionary elements at home and abroad, to return the looted property of Muslims and to preserve the achievements of the Revolution.”

He added, “As a result of the prosecution of the active members of the perverse and Zionist Baha’i party, one of the officers of the Islamic Revolutionary prosecutor of Tehran, located at the intersection of Shahid Ghodousi, during the inspection of the house of one of Hojabr Yazdani’s relatives, discovered a considerable amount of jewelry, ten kilograms of silver and 68,600 tomans in cash. By the order of the competent judicial authorities, this property will be confiscated and subsequently deposited in the treasury of the government of the Islamic Republic.”

The official added that the arrested person was a member of the perverse Baha’i sect who intended to harm the Islamic Republic by accumulating this capital.

Our correspondent reported, “The jewels exhibited have been underground for many years and are considered as antiques; among these same jewels, stamps in the form of gold can be found, which are considered antique and very precious. Also next to these jewels, which comprise different coins and bracelets, a number of valuable [pieces of] silverware can be seen.”

In conclusion, this official added, “We ask the people if they have any information about such cases, to inform the office of the Islamic revolutionary prosecutor, located at the intersection of Shahid Ghodousi, or to telephone 841147 to 50.”