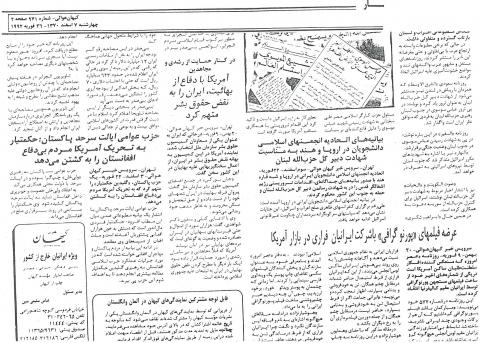 While Supporting Rushdie[1] and Mujahedin[2], and by defending the Baha’is, United States Accused Iran of Violating Human Rights

Tehran – Kayhan-e Havaei News Service – 20 Bahman [1370] – 9 February [1992] – Although Iran has been elected one of the deputies [sic]to the United Nations Commission on Human Rights (UNCHR), the United States representative to the Commission accused Iran, in a speech, of violating human rights because of the persecution of the Baha’is in Iran.

John Bourges[3] in a gathering of the members of the United Nations Commission on Human Rights (UNCHR) said, “The followers of the Baha’i Faith in Iran have lost their work, are deprived of the right to education and access to shelter, and have been imprisoned because of their religion”.

Without presenting any evidence, he claimed that, “thousands of Baha’i properties, assets and even Baha’i cemeteries have been confiscated in Iran, and the situation is so bad that even deceased Baha’is are not immune to the persecutions”.

The United States, which had previously protected the Mujahedin and even Salman Rushdie, this time by broaching [the subject of] the violation of the human rights of the Baha’is, has started the propaganda against the Islamic Republic.