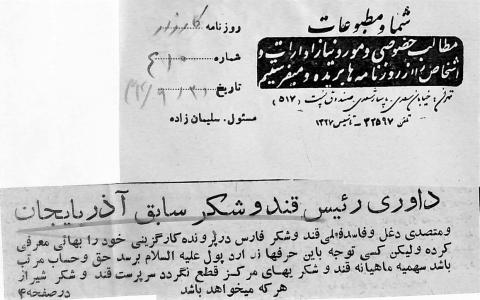 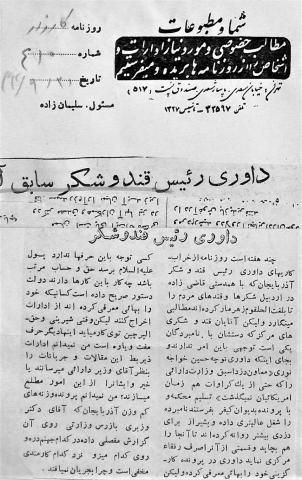 For the last few weeks, articles have been written in newspapers about the subversions of Davari, the head of sugar industries in Azerbaijan, who, in collaboration with Qazizadeh in Ardabil, has looted and devoured people’s shares. However, the men in charge at the central sugar industry, who work hand in hand with the above-mentioned, are not concerned. Instead of bringing Davari, an apprentice of Hosein Khajeh Nouri—the former deputy thief at the Ministry of Finance, who didn’t even [forsake] a single American tie—to justice and sending his file to the criminal courts, [they] gave him a higher position and sent him off to Shiraz for further theft, so that he could continue to plunder there and spend some of it on his central friends.

Davari introduced himself as a Baha’i in his personnel file, but no one pays any attention to these words. As long as the payoff is received, and the protection money is regular, they couldn’t care less about these matters. The government has given strict orders that those who introduce themselves as Baha’is need to be dismissed from offices; however these orders are useless when gifts and bribery are involved. I do not know whether relevant departments bring these articles and occurrences to the attention of the minister of finance and inform him of these matters, or not. I do not know where the hell and on whose desk and with which employees are hidden the weightless files of Azerbaijan, about which, the ministerial investigator, Dr. Vaziri, has prepared a detailed report, and why they are not being processed.