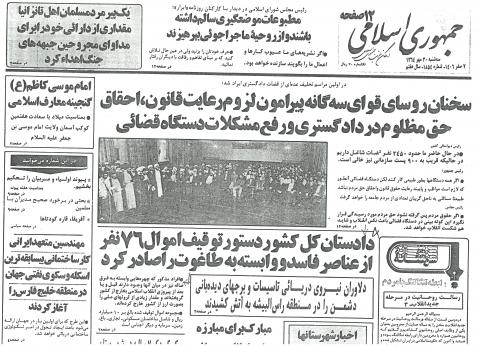 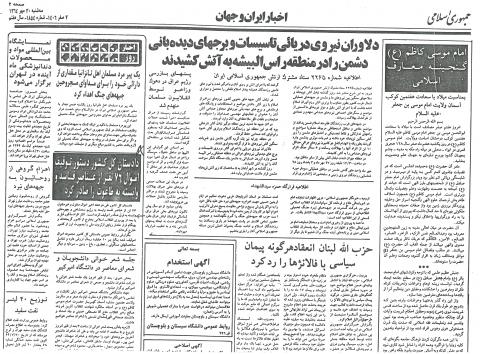 Organ of the Islamic Republic Party

The prosecutor general has ordered the confiscation of the properties of 76 elements of corruption, connected to Taghut.

Among them are mentioned faces attached to the perverse [Baha’i] sect, before or after the victory of the Islamic Revolution, [who] escaped the country and took large fortunes of national wealth as foreign currencies with them.

The total value of the confiscated properties is over 10 billion rials, which includes: residential buildings, commercial buildings, farmlands, land and capital and other assets,...

The country’s prosecutor general, during the past two weeks, ordered the confiscation of the movable and immovable assets of 76 corrupt elements, connected to the imperial regime and [those] personalities attached to the perverse [Baha’i] sect. Most of the mentioned people, before or after the victory of the Islamic Revolution, escaped the country, and during their departure, took large fortunes of the national wealth with them in the form of foreign currencies.

According to the report of the Public Relations Department of the National Public Prosecutor's Office, the total value of the confiscated properties exceeds 10 billion rials which includes: the residential and commercial buildings, farm lands and capital and other assets.

Bepish: We condemn suppression of our fellow Baha’i Iranians and defend their rights

Open Letter to the authorities responsible for Roshankouh events

Response to the report on Roshankouh on the national TV

BIC: The Iranian leadership's plan to enrich itself by seizing Baha’i properties

BIC: Seizures of Baha’i irrigated farms in the midst of Iranian water crisis

BIC: Iran’s oppression of Baha’is is unfolding with greater intensity

Akhbar Rooz: Workers' Communist Party of Iran condemns persecution of Baha'is and hate speech against them

BIC: Unprecedented reaction in support of Baha’is under attack in an Iranian village

HRANA: Confiscation of properties and assets of two Baha’is in Bandar Lengeh

HRANA: Protest by religious and political figures around the world to confiscation of Baha’i properties in Ivel