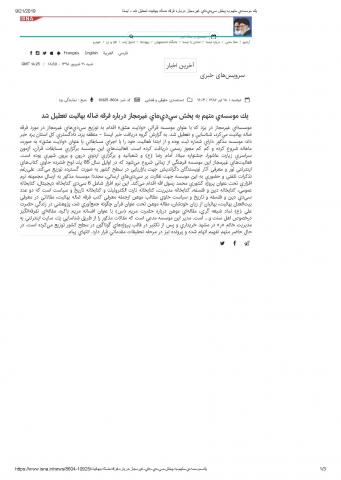 An illegal institution in Yazd, known as the Quranic Institute of Velayat-e-Eshgh (Domain of Love), which distributed illegal CDs about the perverse Baha’i sect, was identified and closed. According to the ISNA news group―Yazd region―the head of the Judiciary of Yazd Province announced that the mentioned institute has a registration number, and from the beginning its activity has been holding competitions called “Domain of Love” on a monthly basis; it [eventually] received an official licence.

The activities of this institute have been holding competitions on the Quran, the national test of Ashura pilgrimage, the festival of the birth of Imam Reza and Shabanieh and holding camps inside and outside the city. The illegal activities of this cultural institution started in the beginning of 1385 (2006), when a CD containing Nour Internet Books and introducing the works of dissident authors for marketing was widely distributed throughout the country.

Despite telephone and in-person warnings to this institute to monitor the distributed CDs, the institute again dispensed a software package called the National Project of Muhammad, Prophet of God. The software includes six CDs: Digital Library, Public Library, Library of Religion and Philosophy, Management Library, Electronic [illegible] Library and Library of History and Politics that contains two CDs on religion, philosophy, history and politics with insulting material, including the introduction of books of the perverse Baha’i sect, articles introducing the House of Justice of Baha’ism, Baha’is in their own language, an insulting article on how the Quran was collected, a study on the life of Imam Ali, symbol of Shiism, an insulting article about Her Holiness, the Virgin Mary, entitled The Legend of the Virgin Mary, divisive articles about the Sunnis, and so on.

The director of this institute claims that he purchased the mentioned articles by identifying a website under the management of “Mrs. R” in Mashhad, and after they were reproduced in the form of various projects, they were distributed throughout the country.

The accused has been informed of the charges and the case is in the preliminary investigation stage.