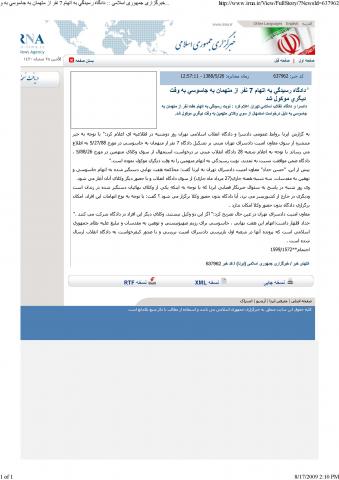 Trial of Seven Defendants in Espionage Has Been Postponed

The Prosecutor’s Office and the Islamic Revolutionary Court of Tehran announced, “The trial of seven defendants accused of espionage was postponed due to a request for deferment by the defendants’ lawyers.”

According to IRNA, on Monday, the public relations [representative] of the Prosecutor’s Office and the Islamic Revolutionary Court of Tehran announced in a statement, “According to the news published by the deputy security director of the Tehran Prosecutor’s Office, the court has been set up for seven people accused of espionage on 27 Mordad 1388 [18 August 2009]. According to the announcement of Branch 28 of the Revolutionary Court that on 26 Mordad 1388 [16 August 2009] the defendants’ lawyers had requested a delay in the court [proceedings], while agreeing to the extension, the hearing of the accused was postponed to another time.”

Earlier, “Hasan Haddad” [real name is Hassan Zare’ Dehnavi], deputy security director of the Tehran Prosecutor’s Office, told IRNA that the trial of seven Baha’is arrested on charges of espionage and blasphemy would begin on Tuesday, 27 Mordad [18 August], at the Revolutionary Court in the presence of their other lawyers.

On Saturday, in response to an IRNA reporter’s question [as to whether], given that one of the lawyers of the Baha’is was arrested and is in prison and the other is living abroad, the trial would be held without the presence of lawyers, [“Haddad”] said, “Due to the type of charges against these people, it is not possible to hold a trial without the presence of lawyers.”

“If these two lawyers [are absent], the other lawyers of these people should participate in the trial,” said the deputy security director of the Tehran Prosecutor’s Office.

“Haddad” said, “The charges against these seven Baha’is are spying for the Zionist regime, insulting [Islamic] sanctities, and propaganda against the Islamic Republic. Their case has been investigated in Branch 1 of the Security Court and an indictment has been sent to the Revolutionary Court.