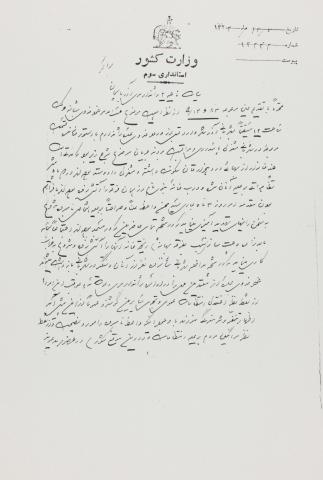 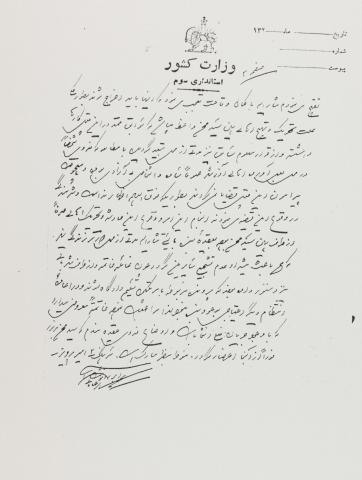 Governorate General of the Third Province

Head of Area 2 of Azerbaijan Gendarmerie

Respectfully, due to the importance of the matter, I present to you herewith the original letter number 12683/J. In response to your instruction, I personally travelled during the evening and arrived in Azarshahr at 12:00, and went straight to the police headquarters. Before the arrival of yours truly, a number of gendarmes, at the order of the commander of the relevant section of the police headquarters, had been keeping watch.

The story is as follows: For some time, a number of Baha’i families in Dehkhareghan [now Azarshahr] have been residing here as traders. During the last two months there have been some demonstrations against them. The door of the house of a person called Nabavi, from the same sect, had been set on fire.

The preliminary conditions being ready, on thethird of the current month [24 February], Seyyed Mohsen, the preacher, openly and explicitly gave threatening speeches against the said people [Baha’is]; as a result, all the mosque attendees together attacked the houses of Balazadeh and Chitsaz (who [belong] to the Baha’i sect) and set their homes on fire and engaged in destruction; whereas, by the intervention of the police force, 16 individuals have been detained.

Yours truly invited a number of reliable people of the town to the Gendarmerie and explained to them the grievous dangers of such disruptive behaviour, which from the general security point of view could lead to widespread disobedience. All present expressed their disgust and shame about this occurrence. Although I advised and counselled publically the mentioned clergyman and condemned his actions, which would ultimately cause general uprising and rebellion against law and order at this critical period in the country, yet, with utmost impertinence and shamelessness, he expressed surprise, stating that these people should be sacked from here. In large measure, the cause of the incitement and unrest of the inhabitants is this same Seyyed Mohsen, the clergyman, who has [previously behaved similarly] in these kinds of affairs. As it has become clear, he was previously exiled from this place, too.

With the personal investigation of the general behaviour of the locality that yours truly has conducted, the [people] of Azarshahr are generally simple and harmless, and never involve themselves with such matters, to the extent that they were extremely sorry and remorseful for the occurrence of this incident. The cause of this [situation] and the actions taken by the inhabitants has merely been this same Seyyed Mohsen. In my opinion, as a disciplinary measure, he should be kept away from this place for a period of time, which will discourage others from taking such bold actions.

As the trouble had subsided and the police headquarters had issued an order to send the case and the perpetrators to court, and law and order had returned to the town, there was no need for my presence. Therefore, I left the town.

Finally, I convey that in the light of the present situation of general elections, yours truly believes that the mentioned Seyyed Mohsen should be immediately called from here. The final decision is, of course, with your blessed person.

The copy is identical to the original [Signature] [illegible]