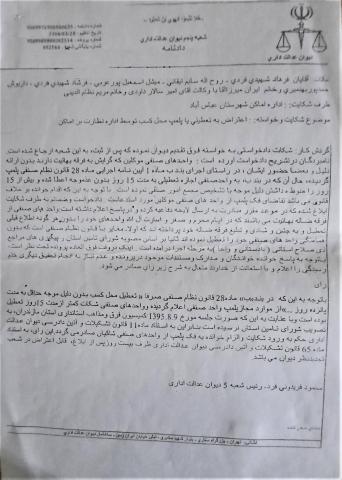 “Do not follow your low desires, lest you deviate”

Branch 5 of the Court of Administrative Justice

Subject of Grievance and Claim: Objection to the closure or sealing of the places of business by the Places Supervision Office

Procedural Synopsis: The plaintiffs have submitted a complaint [on the above subject] to the court, which was referred to this branch after registration. The above mentioned [plaintiffs], in description of the petition, have stated: “The commercial units of the clients who are inclined towards the Baha’i sect have been sealed without any reason provided, and sometimes without their presence, in order to implement paragraph b of Article 1 of the executive by-laws of Article 28 of the Law of the Trade Union (Temporary Closure of Commercial Units); whereas, according to paragraph b, the [owners] have the right to take a leave of absence for up to 15 days without a valid excuse, and a closure of more than 15 days is subject to the provision of a valid reason, at the discretion of the Trade Affairs Association.

Due to the fact that the action taken by the defendant is against the law, it is requested that the commercial units of the clients be unsealed. The petitions and appendices were provided to the defendant, who submitted the defence bill in due time. In response to it, the defendant has replied that, during the months of Muharram and Safar, and the commemoration of the captivity of Alollah [Family of God], the commercial units belonging to the members of the perverse Baha’i sect were closed without any prior notice and they celebrated, rejoiced and propagated their perverse sect, and that firstly, it is against the law of the trade union to close their businesses without coordination, and secondly, it has been implemented based on approval of the Provincial Founding Council and the follow-up of the competent provincial authorities (Prosecutor’s Office and VAJA [The Ministry of Intelligence of the Islamic Republic]).”

The case is now being [examined] at an extraordinary session. According to the statements of the defendants, the documents in the file, and [the fact that there is no] need for further investigation, the court announces the end of the investigation and with the help of God Almighty, the following verdict will be issued.

According to paragraph “b” of Article 28 of the Law of Trade Union [Temporary Closure of the Commercial Units], “closure of the place of business without a valid reason for at least fifteen days ...” is one of the cases in which sealing the commercial units is permitted. The commercial units of the plaintiffs were closed for less than 15 days, and since the minutes of the meeting dated 9 Aban 1395 [30 October 2016] of the Commission on Sects and Religions of Mazandaran Province, had not been approved by the Provincial Security Council, according to Article 11 of the Law on the Organization and Procedures of Administrative Court of Justice, a ruling has been issued to file a complaint and oblige the defendant to unseal the plaintiffs’ trade premises.

According to Article 65 of the Court of Administrative Justice Code of Procedure, this decision can be challenged in the appellate branches of the Court within twenty days after notification.

Head of Branch 5 of the Court of Administrative Justice