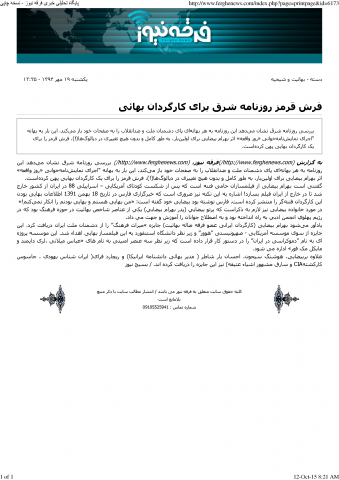 A review of Shargh Newspaper shows that this newspaper, under any pretext, opens its pages to the enemies of the nation and the counter-revolutionaries. This time, under the pretext of “reading the script” of “Day of the Event” by Bahram Beyzai, for the first time, completely and without any changes in the dialogue (!), it has spread the red carpet for a Baha’i [film] director.…

It should be mentioned that Bahram Beyzai is one of the filmmakers who supports sedition, and after the defeat of the American Israeli coup in 1388 [2009], he left Iran to make a film abroad! It is also necessary to point out that Fars News Agency, on 18 Bahman 1391 [6 February 2013], published the information that this seditionist director is a Baha’i. Fars wrote that Beyzai had said “I am a Baha’i and do not deny that I am a Baha’i.”

Regarding the Beyzai family, it should be noted that Parto Beyzai (Bahram Beyzai’s father)[1] was one of the prominent elements of the Baha’is in the field of culture, and had established a literary association during the Pahlavi regime. He used to (so-called) “teach” and gave direction to the youth.

It should be noted that Bahram Beyzai (Iranian director, member of the perverse Baha’i sect) has already received the Cultural Heritage Award from the enemies of the Iranian nation. The award was presented to the Baha’i filmmaker by the American-Zionist Hoover Institution under the sponsorship of Stanford University, which has launched a project called “Democracy in Iran” under the auspices of three security elements, directed by Abbas Milani, Larry Diamond and Mike McFaul.