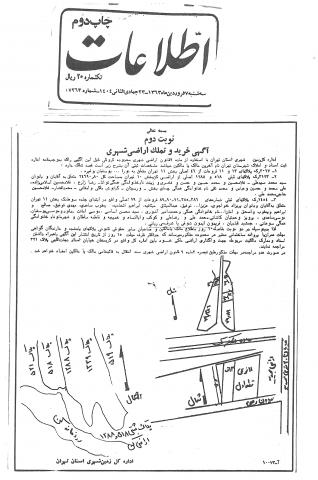 Advertisement for Purchase and Ownership of Urban Lands

The Head Office of Urban Lands of Tehran Province, under Article 9 of the Urban Lands Act, intends to take ownership of the urban lands in the area map below this advertisement, bearing the names of the last owner or owners, this being in accordance with the letter of the Bureau of Notary and Property Registry of the City of Tehran, with the following registry details:

Therefore, the legal and lawful owner or owners and proprietors of the mentioned lots and holders of a  civil liability certificate [reference below] for construction or a valid building permit in the mentioned locality, are hereby informed twice within ten days, to present themselves, bringing with them the relevant ownership deeds and documents for transferring their ‘Real’ properties to this Head Office, located in Karim Khan, Ostad Nejatollahi Street, number 321, within 15 days of the publication of this advertisement, at the latest.

In case of non-appearance within the given period, with reference to Addendum 2 of Article 9 of the Urban Lands Act, the deed of transfer will be signed vicariously on behalf of the owner or owners.

[Map of the lands]