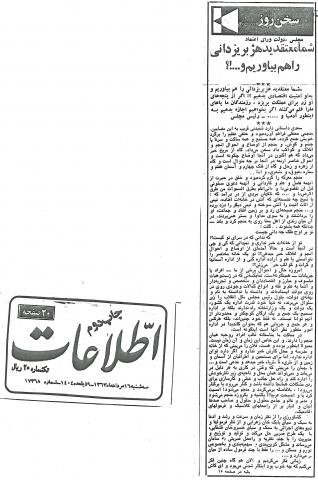 Talk of the Day

Parliament, Government and the Vote of Confidence,

Do You Believe We Should also Bring Hojabr Yazdani and....!?

“Do you believe that we should also bring Hojabr Yazdani and give him economic security, too?  Even if gold drops from his fingers for our country, our fighters will cut off our legs should we allow these types of people and …”- the Speaker of Parliament

...The agriculture has regressed, there is abundance and cheaper [products] but… but Elghanian and Hojabr Yazdani have also descended! Descended from the glory!...Swear to God, we do not say that this person or subject is capitalist and feudal, or [this is] capitalism and feudalism, or support them and knowingly and deliberately prefer one rank over another... swear to God, the Marxist and materialist and eclectic analyses are wrong. However, we say, swear to God, that the way some people are thinking and the extreme directions they have taken in practice, whether they like it or not, will turn the country’s economy [into] the arena of undebated capitalists, wealthy and benefit seekers and strong and irreligious agglomerates.

They say: Even if with good intentions and good motives, people like Hojabr Yazdanis were blamed only due to being Baha’is; all of them and those similar to them can come back to the country to work, and the road is open for them.

….In conclusion, there will be ways to solve the problem of his being a Baha’i and one must not worry. Firstly, it has not been proven yet. On the contrary, the person in question was Muslim. He is neither a natural infidel [blasphemous] nor a national one, because at the time of his conception his parents were Baha’is. He has not been a Muslim who has become Baha’i, that we [can] say he is a national infidel. Whatever he has been [in the past], now he has repented. In this case, his repentance is also acceptable.