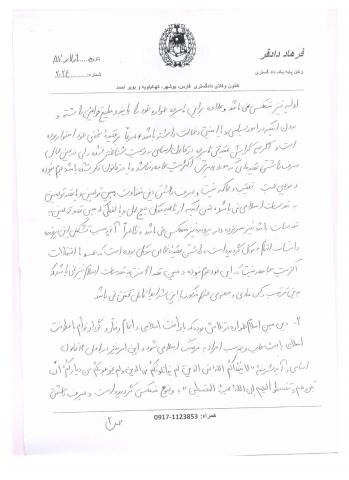 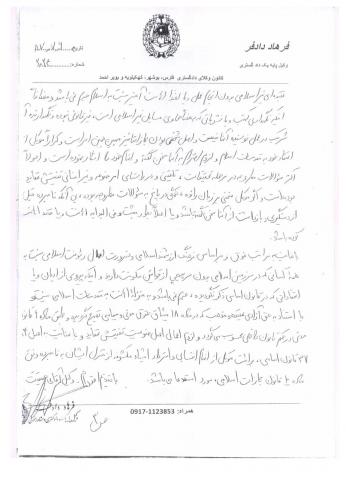 Respectfully, concerning case reference 108 16/87 before your honour, as counsel representing

Mr. Enayatollah Haghighat, notwithstanding his personal beliefs, and solely as an advocate for his right to a defence and fair process in the administration of justice, which is the basic right of every citizen, I submit to you the following:

Moreover, possession of books and publications that might contain texts contrary to Islam is not illegal, and the person possessing them should not be held responsible for the views of the author; the law of individual punishment is indicative of this fact.

The defendant has repeatedly stated that he respects and believes in that which is sacred in Islam and has spoken of the importance of respecting these principles and categorically denied the charges against him.  Also, most of the questions asked of the defendant during the interrogation have been imposed on him as suggestions, and the process has been unjustifiably that of “thought control.”  In such a setting, whatever the defendant has said has been in response to the questions asked of him, without his having made any comments on these matters prior to his arrest or insulted Islam intentionally and deliberately.

Based on these reasons and in accordance with the pious Islamic culture and its principles of kindness and mercy towards those who live in an Islamic land and who are law-abiding citizens, and on the fact that having other beliefs is not a crime and should not be considered as an insult to Islam; and, furthermore, in light of the freedom of belief guaranteed by in Article 18 of the Covenant on Civil and Political Rights; and in accordance with Article 9 of the Civil Law, which prohibits the investigation of an individual’s beliefs; and in reference to Articles 14 and 37 of the Constitution; the defendant should be acquitted and items seized from his home returned to him, as reflected in Article 10 of the Islamic Penal Code.

Attorney at Law and legal advisor

Request for collateral to be released