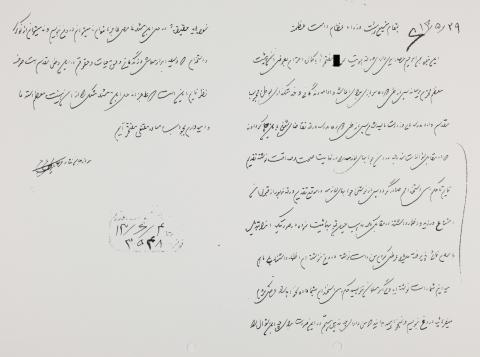 Your Excellencies the Cabinet Ministers,

This servant, Abdorrahim Hesar-Amiri, holder of ID card number [redacted], is honoured to respectfully inform you of the following. After completing my military service, in order to make a living and continue my life and service to my beloved and sacred homeland, I entered the schools of the Ministry of Finance, and upon completion of my studies they offered me a job, for which I filled out a form and responded to the questions in it with utmost honesty and truthfulness, so that my official employment order could be issued.

After I filled out the form and answered the questions, they refused to accept it from me and stated that, since I had listed “Baha’i” in response to the word, “religion”, they would only accept it if I would change it to Islam. I said, “I have told the truth.  I have not lied.” They said, “Yes, we know that you have stated the truth. However, if you do not write Muslim, your official employment order will not be issued.” I said, “Are you saying that I should write in a lie?  And you don’t want to know what religion I have?  If so, why have you asked this question?”

Truly, I am powerless to solve this complex problem. I can neither tell a lie, nor give up trying to serve and be employed, which is the means of my livelihood and my birthright in this sacred homeland. I therefore, beg of your esteemed Cabinet to resolve this problem. I hope to be honoured with your favourable and convincing response.

[Stamp of receipt by the Office of the Prime Minister]