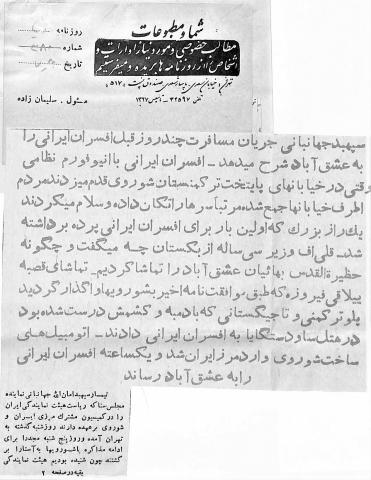 This is a brief memoir of Commander Jahanbani: “On 1October, the eighth day of the month of Mehr (15 days ago), we arrived in Ashgabat, the capital of Soviet Turkmenistan, together with Brigadier General Razmara and Brigadier General Moezi and other members of the Iranian delegation to the Iran-Soviet Border Dispute Resolution Commission…

Haziratu’l-Quds of the Baha’is of Ashgabat

... In one of the streets, we suddenly saw a very large white building with an emerging dome, which seemed to have been shattered by the bombing of planes, and there was a large crack in the dome and the roofs and rooms of the said huge building. We asked our guides, “What kind of building was this that was hit by the earthquake like this?”

The guide replied that the building was the holy shrine of the Baha’is of Ashgabat, which was built by order of Abbas Effendi at the beginning of the revolution and was unparalleled in strength and style, and that before the earthquake, it was the Museum of Fine Arts of Soviet Turkmenistan, and when the earthquake hit, the building collapsed, and, as you can see, it collapsed.

The guide then added that many engineers had come from Moscow to restore the magnificent building but had not been able to draw up a plan to restore it.

Poem by 12-year-old Sami, for his mother in prison, Sousan Tebyanian

Question and answer between a teacher and a Baha’i student