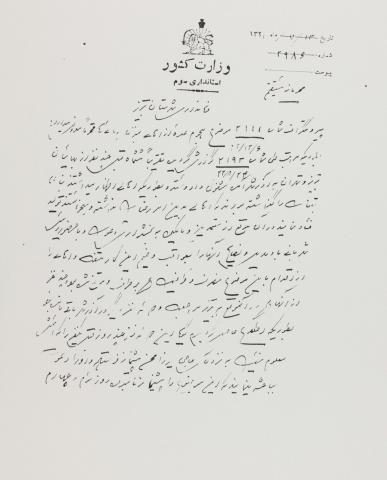 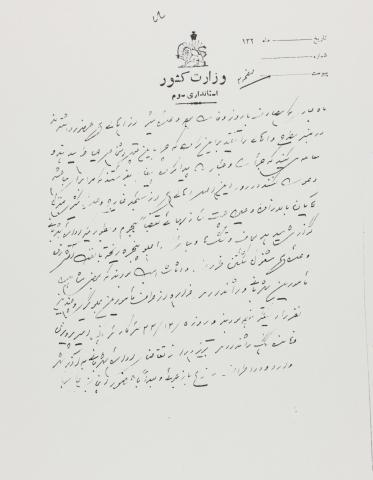 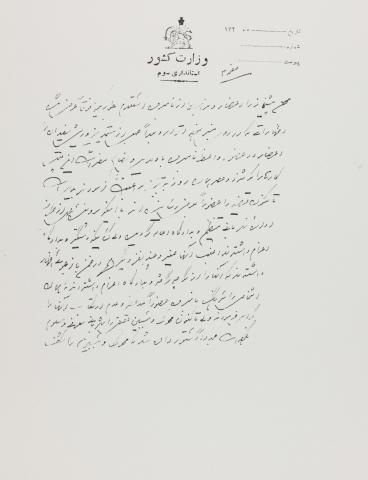 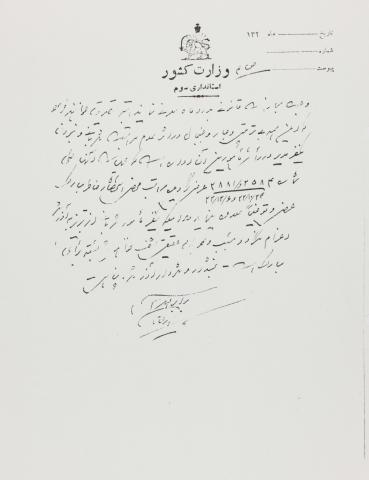 The Governorate Office of Third Province

Following telegraph number 2888, dated 6 Esfand 1322 [ 26 February 1944], about the attack on the Baha’i houses by some residents, I would like to convey that, as reported on number 2193, of 24 Aban 1322 [16 November 1943], a few Baha’is from Tabriz and Tehran entered the City of Azarshahr for business. As residents reported, they began to [disseminate] propaganda and the residents were not happy; therefore they created sedition. At that time, some trustees, land owners and the head of the police force were invited to the district office and the residents were warned and advised of the possibility of negative consequences from these actions. The residents were discouraged, and with mediation, some [of the Baha’is] returned to Tabriz and two or three of them remained in Azarshahr.

As was reported a few days ago, the remaining two or three [Baha’is], sending an unknown messenger to the leader of the congregational prayers, Mr. Haji Mirza Mohsen, invited him to a debate. On the third or fourth day of the month, the leader of the congregational prayer announced the topic at the pulpit of the mosque and criticized the public for paying attention to these people or negotiating with them, that they dared to send him a message and invite him to a public debate.

Following his speech, some left the mosque and a group of them attacked the houses of Mr. Balazadeh and Hosein Chitsaz. As was reported by police, the bedding, mattresses and clothing of [Mr. Balazadeh] were thrown out of the window and set on fire by petrol. Some start breaking the dishes and other household equipment, and when police officers and gendarmes noticed, they escaped from the scene. However the rioters were prevented by the police officers and some arrests were made.

On 5 Esfand 1322 [25 February 1944], Colonel Amir Parviz and the representative of the gendarme regiment, at the request of the police station, entered Azarshahr and investigated the matter. Later on, with my presence, Haji Mirza Mohsen, the leader of the congregational prayers, was summoned and asked about his sermon. As reported above, he confessed to his speech at the pulpit.  Then the group of trustees and the elders were called in, and in my presence were given reasonable advice and again were reminded of the dangerous consequences of these types of actions. On the eve of the same day he returned to Tabriz.

Obviously, they must have reported the incident to you personally. Although the records of the actions organized by police have been submitted to the court, the majority of those arrested are minors, and some have reported being arrested in the alleys and sent to the court. All of them were met by the colonel, and he testified to their innocence. But the police have not yet identified or introduced the main culprits to the court. It was instructed again to identify the main perpetrators and introduce them to the court for legal punishment. Surely you would admit that all this chaos and havoc are the consequences of police negligence and the lack of direction amongst the officers, as it was reported according to [letter] number 2584-24/10/2903 of 6 Esfand 1922 [26 February 1944].

For your information, I would like to convey that as long as one police officer is not sent from Tabriz Police Station to Azarshar, the main culprits and the perpetrator will not be identified. The decision is yours.

The Mayor and the District Manager of Azarshahr, Panahi

It is identical to the original