Executive
Closing and sealing of shop
Anti-Baha'i legislation and Ordinances
Mazandaran
The Commission on Ethnicities, Sects and Religions
‌Sealing of Baha'i shops in Mazandaran
English
فارسی 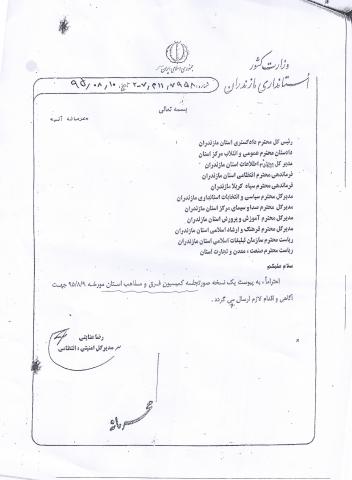 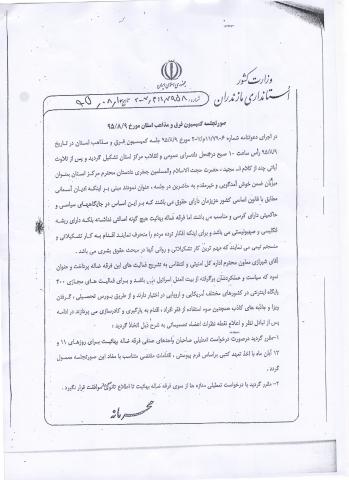 Office of the Provincial Governor General of Mazandaran

In the Name of the Almighty

Head of Justice Administration in the Province of Mazandaran

Director General of Intelligence in the Province of Mazandaran

Headquarters of the Police Force in the Province of Mazandaran

Headquarters of Sipáh-i-Karbalá[1] of Mazandaran

Director General of Education Department in the Province of Mazandaran

Head of Islamic Development Organization in the Province of Mazandaran

Respectfully, enclosed is a copy of the minutes of the Provincial Commission on Religions and Sects, dated 9 Aban 1395 [30 October 2016], forwarded to your attention for information and necessary action.

In light of invitation number 2-7/M11/7906, dated 9 Aban 1395 [30 October 2016], a meeting of the Provincial Commission on Religions and Sects was convened on 9 Aban 1395 [30 October 2016], at 10:00 a.m. sharp, at the Provincial Public and Revolutionary Courts, where, subsequent to recitation of a number of verses from the Holy Quran, the host, the Honourable Hojatoleslam Jafari, respected provincial prosecutor, welcomed the participants and addressed the meeting, indicating that divine religions in our cherished country’s constitution have rights, based on which they have a place in the political and administrative platforms.  However, the perverse Baha’i sect has no sanctity, and it stemmed from Britain and Zionism, which, to divert the minds of the masses, began its administrative activities and team efforts.  Their most significant administrative efforts and sentiments are in the area of human rights.

Mr. Shirazi, respected deputy of the security and Police Force headquarters, expounded on the activities of this perverse sect saying that they follow the policies and directions of Israel’s House of Justice, and in order to carry out their cyber activities they have 400 websites in various countries in the United States and Europe.  Through academic scholarships, obtaining visas, and other false attractions, as well as taking advantage of the feebleness of the poor, they attract people to their side and form a network.  In continuation, after consultation and discussion among members, the following decisions were made:

Advisory opinion of Deputy Prosecutor General: The sealing of the commercial units belonging to Baha'i's has no legal basis

Letter of complaint by a Baha'i in Mazandaran to Hassan Rouhani

Letter of complaint by a Baha'i in Mazandaran to Hassan Rouhani

Baha’i businesses sealed by the government

Dealing with Baha'i business who want to observe Baha'i holidays

Dealing with Baha'i business who want to observe Baha'i holidays

HRANA: 32 Baha’i shops in Sari closed illegally for over 1700 days

HRANA: Letter from Ghanbar-Ali Ghanbari, father of a Baha’i prisoner in Sari

Violent expulsion of Baha’is from their homes