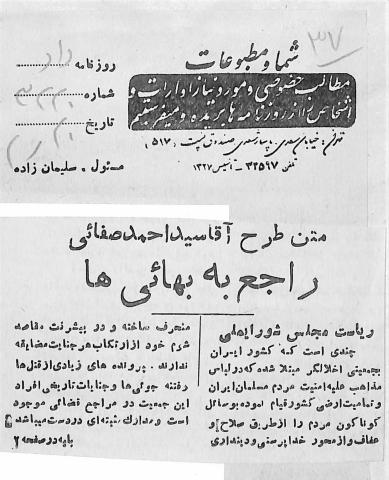 To the Speaker of the National Consultative Assembly:

For a while now, Iran has been afflicted by a disruptive group which has appeared in religious outfit to revolt against the well-being of Iran’s Muslim population and the territorial integrity of the country. By various means, [they] have diverted the people from the axis of righteousness, piety and modesty, and in the pursuit of their malicious intentions, are not deterred from committing any crime. There are many cases of murder and sedition and the historical identities of this population in the judiciary, and there is affirmative evidence of their involvement with foreigners to divide the country. In recent years, while the country’s state of affairs has been disrupted, the adventurous and freedom fighter operatives have found liberty, the members of this group have increased their audaciousness and activity, and by insulting our culture and religious beliefs, opposing religiosity and the worship of God, have interrupted the society’s security.

The community leaders consider this inappropriate to pursue, and now that law and order in the country has been restored through the Muslim and the nation-loving imperialists’ guidance of the king, the voice of the nation has finally reached the king. Thank goodness, similar to most of the urgent social matters, it has attracted attention and the law enforcement officers have arisen to respond to their national and religious duties.

We, the undersigned, reaffirm that the actions taken by the law enforcement agencies have been approved by the National Assembly. In order to curb the corruption, we present the following plan, consisting of four articles, three being urgent and hereby urge the delegates of the Consultative Assembly, whose interest is the safeguarding of the nation and protection of Islamic dignity, to approve the following:

Article 1 - The corrupt Babi community and those linked to them, such as the Azalis and the Baha’is, shall be declared as outlawed, illegal, and against the national security.

Article 2 – From now on, membership in this community, or any kind of support in any form or shape, shall be punishable by imprisonment [for] two to ten years and loss of civil rights.

Article 3 – All immovable properties used as places of gathering, or their community centre and affiliated organizations, and any proceeds gathered from their community, shall be transferred to the Ministry of Culture, in order to establish educational organizations and to disseminate religious education and principles of piety.

Article 4 – Members of this community who are employed by any government organizations or their subsidiaries shall be expelled at once from service and will never be eligible for employment ever again.