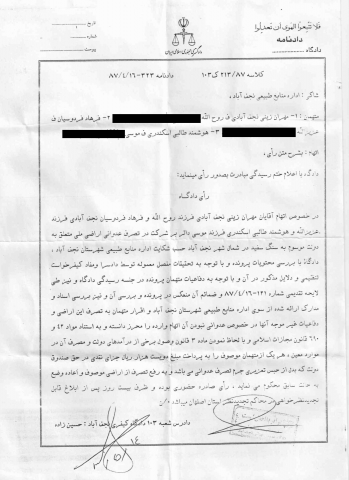 Accusation: As noted in court order.

The court renders the following decision:

Concerning the charges against Mr. Mehran Zeini Najafabadi, son of Rouhollah; Farhad Ferdowsian, son of Azizollah; and Houshmand Talebi Eskandari, son of Mousa, of involvement in the forcible expropriation of a state-owned property, known as Sang-e-Sefid, located to the north of Najafabad, based on a complaint made by the Office of Natural Resources in Najafabad, subsequent to reviewing the file, the findings of routine detailed investigations by the prosecutor’s office, the contents of the bill of indictment and the reasons therefor, and after consideration of the arguments and explanations put forth by the accused in court, further review of document number 121, [dated] 16 Tir 1387 [6 July 2008] and its enclosures, and consideration of documents produced by the Office of Natural Resources of Najafabad, and hearing the confessions of those accused to having expropriated the said property, and their unacceptable argument as to the legitimacy of the ownership, this court sustains the charges and, on the basis of Articles 42 and 690 of the Islamic Penal Code and in accordance with Article 3 of the …, hereby fines each of the above-noted accused in the amount of 200,000 rials, to be paid in cash to the public treasury.  This penalty is equivalent to a period of Taziri sentence [correctional punishment below the normal level] for the said crime of forcible expropriation.  The accused are, furthermore, required to vacate the property and restore it to its original condition.  This court order was delivered in the presence of the accused and may be appealed within 20 days at the Court of Appeal in Isfahan.

Prosecutor of Branch 103 of the Penal Court of Najafabad: Hoseinzadeh