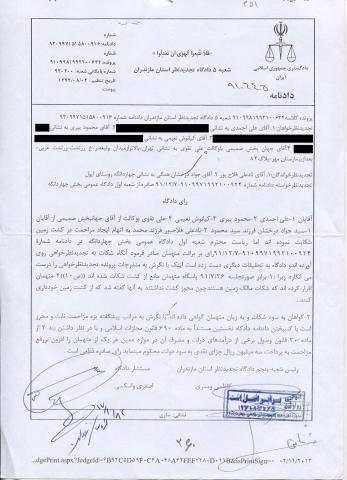 “Do not follow (your) low desires, lest you deviate”

Branch 5 of the Court of Appeal of Mazandaran Province

Appellees: 1- Mr. Nad-Ali Fallahpour 2- Mr. Javad Derakhshan, both residents of Chahardangeh in the Village of Ivel.

1-Mr. Ali Ahmadi, 2- Mr. Mahmoud Piri, 3- Kianoush Naimi and 4 - Mr. Ali Taghavi, with a power of attorney from Mr. Jahanbakhsh Samimi, have complained that: 1- Mr. Seyyed Javad Derakhshan, son of Seyyed Mahmoud 2- Mr. Nad-Ali Fallahpour, son of Mohammad, have disturbed them for cultivating their land. However, the esteemed head of Branch 1 of the General Court of the Chahardangeh District issued a verdict of acquittal for the defendants in the lawsuit No. 9109971992100924 on 7 Esfand 1391 [25 February 2013]. Therefore, the appellants appealed, and the court began further investigations.

Now, by looking at the contents of the case, the court finds the appeal to be justified, because, 1- according to a statement of the police station, dated 26 Mehr 1391 [17 October 2012], the accused prevented the appellants from cultivating (page 10); 2- The accused have confessed that the appellants are the owners of the land, and since they did not have permission to cultivate, they were told to stop cultivating in their land; 3- The witnesses have testified in favour of the appellants and against the accused [appellees], and by looking at the aforementioned statements, the offence of disturbance is proven and inevitable.

By [reversing] the verdict of the first [hearing], based on Article 690 of the Islamic Penal Code and considering paragraph 2 of Article 3 of the Law on Receiving Some Government Revenues and Consuming It in Certain Cases, [this court] sentences each of the defendants to pay a fine of three million rials in favour of the government, in addition to ending the disturbance. The verdict is final.

[Signature on the Official Stamp]

[Stamp] Photocopy / Copy is identical to the original

[Handwritten note on top of the page]