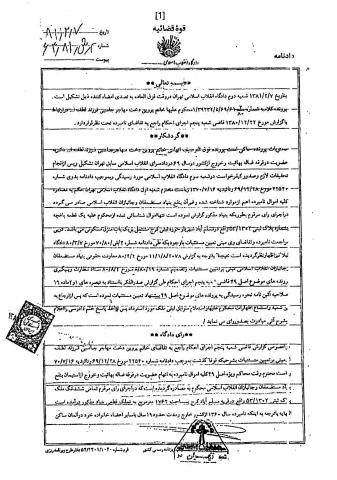 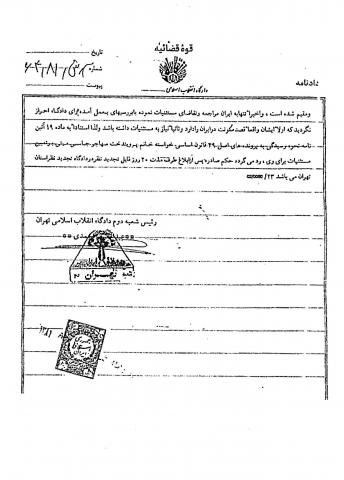 On 7 Ordibehesht 1381 [27 April 2002], Branch 2 of the Islamic Revolutionary Court of Justice,  Tehran is convened at an extraordinary session, presided over by the undersigned, to review files numbered 1/39232/TA/69/61 2/80 in relation to the appellant, Mrs. Parvindokht Mohajer Jasbi, daughter of Lotfollah, concerning the statement dated 22 Esfand 1380 [13 March 2002], issued by the judge at Branch 5 for the enforcement of orders, as per the request of the above-named.

The file records indicate that the file of the above [described accused], Mrs. Parvindokt Mohajer Jasbi , daughter of Lotfollah, who is a member of the perverse Baha’i sect, and whose file was before the former Office of the Prosecutor of the Islamic Revolution subsequent to her leaving the country in year 1369 [1990/91], whereby, after conclusion of the prescribed investigation and issuance of the indictment, [the case] was heard by Branch 3 of the Islamic Revolutionary court of Justice, and by virtue of the initial judgement number 22540, dated 28 Esfand 1369 [19 March 1991], and its confirmation, dated 16 Mehr 1370 [8 October 1991], by the honorable head of Branch 1 of the Islamic Revolutionary Court of Justice, Tehran, an order was issued for the confiscation of all her properties and assets, both identified and others, for the benefit of the Foundation for the Oppressed and Disabled.

To enforce the said order, as indicated in the report of [the Mostazafan] Foundation, the only identified asset of the appellant was a small orchard block registered under number 53/1302, which includes a residential property located in Moslemabad in Shahriar, registered in the Karaj District [land] registry office. Following the return of the appellant, she made a request that the property be dealt with under the exclusion [clause of the law], notwithstanding the fact that this issue had already been addressed in court order number 70/80/Sh/2, dated 7 Khordad 1380 [28 May 2001]. Consequently, in consideration of report 11/1/8/2078, dated [1 Tir 1380 (22 June 2001)], of the legal department of the Foundation for the Oppressed and Disabled to determine the applicability of the exclusion [clause], and decision number H/80/19, dated 2 Aban 1380 [24 October 2001], of the commission in charge of supervision and investigation of cases concerning the provisions of Article 49, the judge at Branch 5 of the Enforcement Division, by relying on notes 1 and 2 of Article 19 of the amended bylaw in relation to investigation of the cases which are the subject of Article 29, has suggested that the exclusion [clause be applied in this case]. Subsequent to the submission of the case to this Branch, and after hearing the remarks of the appellant, and conducting an inquiry about the registration records of the subject property, and upon receiving the response, [the court] hereby concludes the hearing and issues a decision as follows.

Concerning the statement issued by the judge of Branch 5 of Enforcement of Judicial Orders Division regarding the motion brought by Mrs. Parvindokht Mohajer Jasbi, daughter of Lotfollah, to determine the applicability of the exclusion [clause], as detailed above, according to court order number 22540, dated 28 Esfand 1369 [19 March 1991], and the confirmation dated 16 Mehr 1370 [8 October 1991] by the Special Court for Article 49, whereby [she] was sentenced to confiscation of her assets due to her adherence to the perverse Baha’i sect, [and is] thus outside of the protection [provisions for non-Muslims], for the benefit of the Foundation of the Oppressed and Disabled, and by virtue of the above decision, the whole six dung[1] of the property [registered under number] 53/1302, located in the Village of Moslemabad, in Karaj, with an area of 1762 square meters, were permanently transferred to [the Mostazafan] Foundation, given that she left the country in 1360 [1981-1982] and lived in Germany with her family for about 19 years, and just recently returned to Iran and brought a motion under the exclusion [clause]. The results of the investigations have not satisfied the court as to whether, firstly, she actually intends to reside in Iran, and secondly, whether she qualifies for the exclusion [clause] based on her needs. Therefore, pursuant to Article 19 of the bylaws concerning the investigation procedure of Article 49 of the Constitution, the motion brought by Mrs. Parvindokht Mohajer Jasbi for the exclusion [clause] is denied. The order can be appealed within 20 days of issuance at the Court of Appeal in the Province of Tehran. /23

Head of Branch 2 of the Islamic Revolutionary Court of Justice, Tehran

[1] [The totality of property is divided into six parts, called dung]