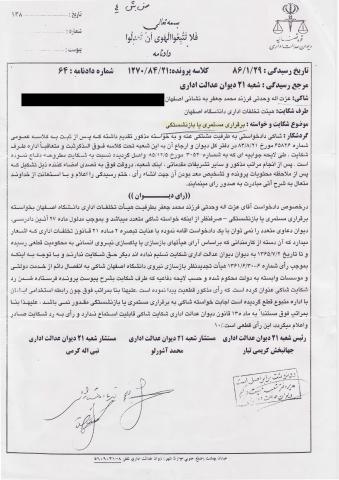 The Court of Administrative Justice

Do not follow your own desires, lest you deviate[1]

Investigating Authority: Branch 21 of the Court of Administrative Justice

Respondent: Commission for the Employment Offences of the University of Isfahan

Procedural synopsis: The appellant filed the abovementioned claim against the Respondent and after allocating the Number 65826, dated 21 Aban 1384 [12 November 2005] with the registry of the Administrative Justice [Court], the case was referred to this Branch under the aforementioned case number. Subsequently, the Respondent provided a statement (number 3052, dated 5 Esfand 1385 [24 February 2007]), as to their defence against the appellant’s claim.  Following the above mentioned actions and upon completion of the legal procedures, this Branch, which is now presided by the undersigned, held a special session in which the case was reviewed with evidence, and the file was deemed ready for hearing. The court then concluded the proceedings and adjourned the court, in order to issue with the assistance of the Almighty God, its decision as follows:

In regards to the claim filed by Mr. Ezzatollah Vahdati, son of Mohammad-Jafar, against the Commission for the Employment Offences of the University of Isfahan in which he asked for the reinstatement of his pension/retirement payment, it is noted that the appellant made multiple claims, which, according to Article 27 of the legal procedure code, cannot be considered when submitted under one case.  Also, according to Addendum 2, Article 21 of the Employment Offences Act, which states that employees who have been sentenced to a definitive conviction by a ruling from the Cleansing and Reconstruction Commission of Human Resources, and who have not filed an appeal with the Court of Administrative Justice by 2 Mehr 1365 [24 September 1986], are no longer entitled to file. Moreover, in the ruling number 6, dated 30 Shahrivar 1361 [21 September 1982], of the Appeal Commission of Human Resource Restructure of the University of Isfahan, the appellant had been sentenced to permanent dismissal from government ministries and affiliated organizations and ,as stated by the Respondent in response to this claim, this ruling is final.  Hence, based on the above reasons and as the appellant’s employment with the [respondent] office has ended, the request by the appellant to reinstate his pension/retirement payment is not possible. In summary, considering the above and based on Article 135 of the Court of Administrative Justice Act, the claim filed by the appellant, does not qualify to be heard and hence the decision is made to deny the claim and enter the judgment.  This is a final judgement.

[Stamp:] This is a true copy of the original – Director of Secretariat of Branch 21 of the Court of Administrative Justice