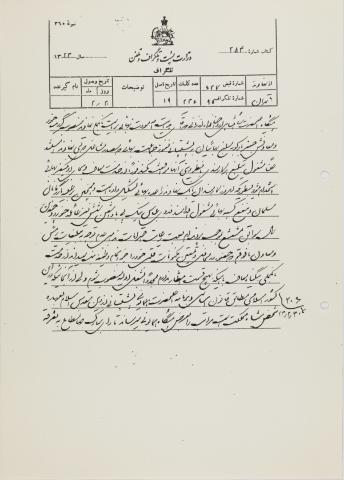 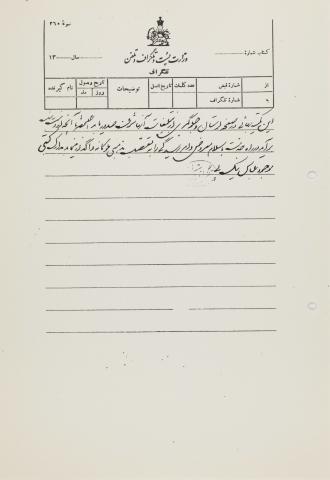 From: Nahavand to: Tehran

To His Imperial Majesty, may our souls be sacrificed to you,

Since Mr. Hedayatollah Mavaddat, who is a Baha’i, has been appointed as the head of the National Bank of Nahavand, he and his deputy, Jaafar Badkoubehei, a Baha’i propagator, with the support and influence of the Baha’i community, who occupy the governmental positions of Nahavand, publically propagate their Faith.

Any employee who does not agree with their religious opinion will be immediately dismissed from service and a Baha’i will be employed in his place, to the extent that today, the employees of the Bank of Nahavand are a group of Baha’is, who act against the interest of the Muslim traders and in favour of the Baha’is.

Yours truly, Abbas Nikpay, with a family of six, having many years of bright background, because of [my] religious observance and lack of attention to the propaganda of my manager and my superiors, who consider the presence in the meetings and inculcating others with their hidden thoughts as part of my duty, was innocently dismissed from my service at the Bank. Although I have absolutely no desire to return to my previous position, because in this Islamic country, according to the Constitution and His Majesty’s plans, supporting the holy religion of Islam is the duty of the person of the country’s king, I would bring the matter to Your Majesty’s attention, so that by issuance of your blessed and world-obeying decision, this Baha’i group will be dispersed from the face of Lorestan and their propaganda will be prevented.

Your Majesty, I submit my readiness to take any action in the path of service to Islam and leave the decision about investigating the matter to the religious zeal of His Majesty.