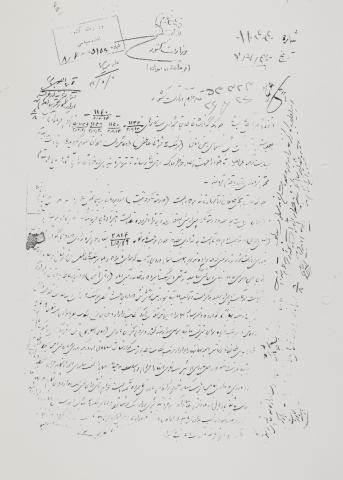 Based on the records of Taleqan District, which are available in that ministry, (dichotomy and dualism) have long dominated this district, particularly because the Baha’i propagators have also created factions in this district, have become bolder, and have increased the dichotomy more than before. Recently, the residents of the Village of Fashandak have made complaints to the district office about their headman (Reza Deljoui) who is also a Baha’i. I took action according to letter number 2824 – 29 Mordad 1322 [21 August 1943] of the esteemed governorate, which, based on report [illegible] of the Ministry of Interior’s inspection, had issued an order to replace the village headman. The above-mentioned village headman appealed to Colonel 2 Atefi, their own propagator who comes to this district twice a year for propagation and investigation, visiting the Baha’is of the district.

The mentioned colonel met me at the home of the head of statistics, (Mr. Hatefi), who is also connected to them, and after a series of discussions and recommendations by the Baha’is, I was not affected. For this reason, Colonel 2 Atefi filed a false complaint, instigated and intrigued the Baha’is and forced Nosratollah, who is a Baha’i and has a record of misdemeanor, to file a complaint. The complaint was forwarded to the governorate under the above-mentioned numbers.

Despite this, I ask that esteemed official to plan for a letter to be written to the Ministry of War as to whether or not Colonel 2 Atefi has the mission of propagating for Baha’is. If he does not, he should be forbidden to come [to this district] so that the Baha’is are not more emboldened toward Muslims. Secondly, I [request] that you decide and order that my mission from [illegible] Baha’is and Muslims [illegible] that harass and abuse the Muslims, [illegible] [send] their request for inspection [illegible] above-mentioned numbers [illegible]

[Handwritten notes on top of the page]

[Official stamp on top of the page]

[Handwritten note in the margin of the page]

Personnel Department pay attention to the stamp and contents of this letter [illegible]. Most of the year has not passed; how is it that the scope of power of the District Office has ended [illegible]