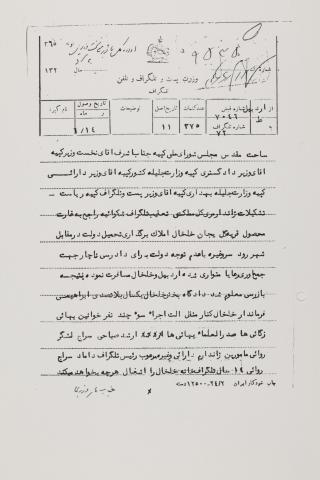 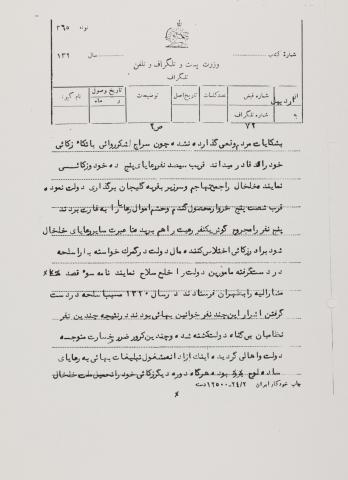 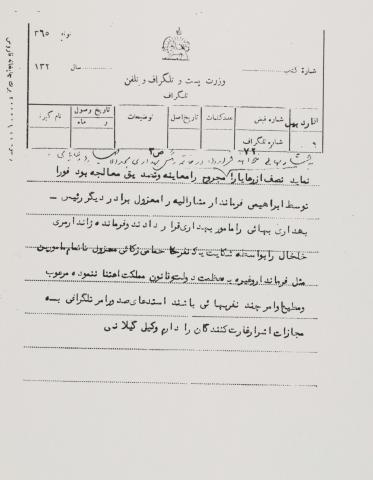 From Ardabil to [Tehran]

The holy threshold of the National Consultative Assembly,

Following the telegraphic complaint regarding the plundering of the products on the properties of the Village of Golijan of Khalkhal, the government-let area in the City of Roudsar, etc., and due to the lack of attention of the government to implementing justice, [I was] compelled to gather the drifted farmers of Ardabil and Khalkhal and I travelled to get the results of the investigation. It became clear that the Court of Khalkhal has not presided over the case for more than a year.

Ebrahimi, the governor of Khalkhal, next to the brazier, has become the instrument of the sinister decisions of a number of Baha’i chiefs, the Zakaeis, the Baha’i erudite, Arshad Sabahi, Seraj Lashkar Ravai, the gendarmerie and finance agents, etc., all [of whom are] fearful of the head of the Telegraph Office, the son-in-law of Seraj Ravai, who has occupied the office for 14 years and acts as he pleases. The complaints of the people have been ignored because Seraj Lashkar Ravai, with the support of Zakaei, considers himself as powerful as destiny.

He has gathered some three hundred workers from his five villages and those of Zakaei, the [parliament] representative of Khalkhal, and invaded the Village of Golijan, the government-let village. They have plundered close to 65,000 kilograms of wheat and the livestock, and the properties of the subjects. [They have] injured five individuals, and had the ear cut off of one of the subjects as a sign of warning for the other subjects of Khalkhal. The brother of Zakaei, the embezzler of the government properties at Customs, has intended to take up arms in order to disarm the government agents. The letter about his attempt was sent to Tehran.

In 1320 [1941], these few Baha’i chiefs were the cause of the arms running by the insurgents. As a result, a number of innocent government soldiers were killed, resulting in losses to the government and workers and damages mounting to thousands, and now they are freely engaged in propagating the Baha’i Faith to the simple-hearted subjects. If, in the next election time, Zakaei imposes himself on the people of Khalkhal, he will force half of the subjects to become Baha’i.

At the end, the head of the Health Centre, Majdol-Atteba, has been attending the injured and treating the subjects. They, through Ebrahimi, the governor, have dismissed him and replaced him with the other brother of the head of the Health Centre, a Baha’i. Zekaei has dismissed the commander of the gendarmerie of Khalkhal [because of] the complaint of a bath-attender, so that all the authorities, such as the governor, etc., will disregard the importance of the government and the laws of the country, and be terrified and obedient subjects of these few Baha’is.

I beg your telegraphic order to punish the insurgents and the plunderers.