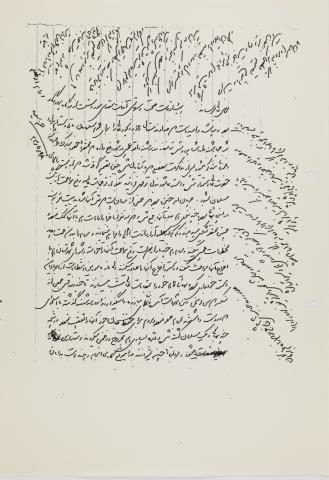 I would convey to your honourable attention:

The health and soundness of that noble person is always my earnest request of God’s threshold. It is my hope that God Almighty may continue protecting you, the possessor of generosity, for all the Muslims forever.

On Wednesday night, I entered Shahroud. Unfortunately, on Tuesday a strange event happened in that city which I will briefly explain to Your Honour. In addition, I [would] mention that after a long discussion with others, it was decided to ask for the help of your high-minded personality and request your attention [assistance]. Perhaps with your attention, the problem of a handful Muslims will be resolved.

The flow of the situation has been like this. There is a group of vile men here whose number may reach approximately 20, who are Baha’is. A few others have also gathered around them, and with the help of two or three people from offices that assist them, have formed a small group. Little by little, they disturb and annoy the local residents, without any reason, and have created strange difficulties for the people. A few times, people have asked the government to prevent these disturbances. The city council has agreed to expel them and issued orders for their expulsion, but again, the police force avoids implementing this order and Baha’is connect themselves to high authorities.

A few days ago, a group from Sangesar, which is located about 30 farsangs[1]  from this city, came to town and started fighting. Last Tuesday, with weapons in their hands, they attacked the people. People chased them in order to protect themselves. As a result, a few Baha’is and a Muslim were killed and a large number were injured and wounded and some ...........   As the government authorities could not do anything, they appealed to Mr. Agha Sheikh Abdollah, who is one of the high religious authorities in this area, who went to the area and dispersed the crowd. Russian troops provided for the temporary comfort of the people. The concern which remains is that this group of thugs and hooligans is constantly seeking to create conflict and attack the city. So far, some of them have been arrested. The government has to take a definite decision to save the Muslims from this unrestrained group of people. It is quite possible they also use money and power as influence and reflect the incident differently in Tehran and get a bad result. Therefore, I have taken your valuable time to request your attention, so that, under your protection, Messrs. Sa’ed and Hajir will take a serious decision and put an end to this work.

I convey my devotion to the honourable Mr. Agha Seyyed Jafar Aghazadeh. May God extend [His] protective shadow.

[1]  A farsang is the equivalent to a league in the European metric system. Each farsang is between 5.3-5.7 kilometres